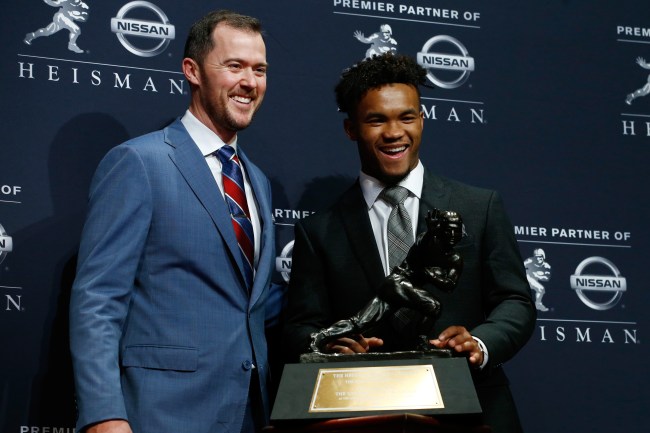 Kyler Murray has been the talk of the NFL since he declared that he was pursuing a pro football career rather than try his hand at pro baseball. While the reigning Heisman Trophy winner was a top-10 pick of the Oakland Athletics in the MLB Draft in 2018, the kid said he felt like his heart was in football and not baseball. Fair enough — but that hasn’t stopped critics from analyzing the potential No. 1 overall pick in this year’s NFL Draft, with some laying into him pretty hard.

Following the reports that came out yesterday from NFL Network’s Charley Casserly saying Kyler Murray received some poor reviews at the NFL Combine from some teams, Murray’s former head coach at the University of Oklahoma, Lincoln Riley, stepped up and defended his former player. As a guest on the Dan Patrick Show, Riley refuted a lot of what Casserly had to say, adding that he personally spoke to every team Kyler Murray interviewed with at the Combine and received very different feedback.

“I’ve personally spoken with the majority of teams that he met with [at the Combine} and everyone was glowing about their conversations with Kyler. … Basically the complete opposite of what Charley [Casserly] said.”

“I just hate that people go out and make these comments and [they] haven’t talked to the two people who’ve actually coached this kid…. You went on what one team said. Which is probably a smokescreen. Kyler was a tremendous leader for us.”

“Kyler [Murray] was a tremendous leader for us … all he cares about is winning. I think our team took on his personality.”

Obviously, Lincoln Riley adores Kyler Murray after coaching him, so coming to a former player’s defense is expected from the head coach. That said, this is classic NFL offseason chatter, where rumors swirl every hour and people report various things as either a smokescreen or to stir up some drama. Riley’s words are pretty powerful, though, because it’s almost as if he’s calling Casserly a liar without actually using that term.

The entire conversation with Lincoln Riley on the Dan Patrick Show was a Kyler Murray lovefest, and sounded as if it was a full-on campaign to save the kid’s name from being dragged through the dirt. You can take a listen to the segment below.

“I have personally spoken with the majority of teams that [Kyler Murray] met with, and every one of them were glowing in their reports about Kyler.” Oklahoma coach Lincoln Riley refutes the report made by Charley Casserly of Murray’s poor performance at combine pic.twitter.com/hyDZJrIVPI

Good on Kyler Murray’s coach for coming to his defense here. The NFL Draft’s still six weeks away, but it’s best to kill all the negative rumors now before teams actually start believing them and rate the player lower. So Lincoln Riley’s just doing what he’s supposed to do as a head coach.