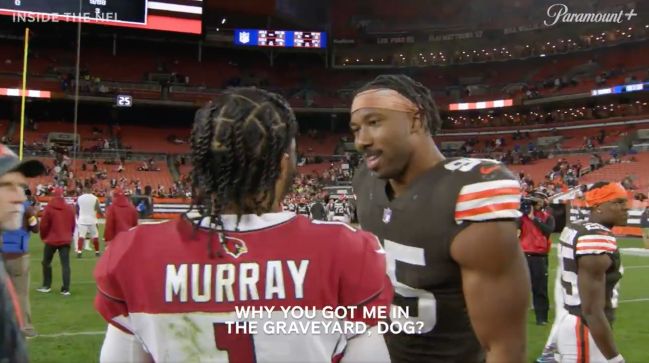 With Halloween around the corner, Myles Garrett took a different approach to his decorations this year. Kyler Murray wants to know why he was included.

Last week, photos began to surface from Garrett’s front yard in Wadsworth, Ohio. As part of his spooktacular decor, the Cleveland Browns defensive end set up a graveyard on his lawn.

However, the headstones had a unique twist. Each of the gravestones featured the names and numbers of quarterbacks around the NFL.

Of those included in the display are rookies Mac Jones and Justin Fields, as well as Justin Herbert, Joe Burrow, Ben Roethlisberger, and Kyler Murray. It would appear as though Murray was confused by his inclusion.

Murray, who grew up less than a half an hour away from Garrett in Texas, played alongside the defensive end in 2015 at Texas A&M. Although he later transferred to Oklahoma and won a Heisman, the 24-year-old wanted to know why he was among those in the graveyard decorations.

Following Sunday’s game between the Browns and Cardinals, Murray sought after an answer.

His postgame exchange with Garrett was caught on a hot mic by NFL Films and it’s hilarious.

Garrett, who was clearly caught off guard by the question at first, laughed it off and shared the love. Although he sacked former A&M teammate once and also brought him down for a loss in the game against Arizona, he gave him proper credit for the performance.

"Why you got me in the graveyard?"

Murray threw for four touchdowns in last weekend’s win over Cleveland. Perhaps it is time to pull up his headstone?