Kyler Murray To Decide Between NFL Or MLB Career 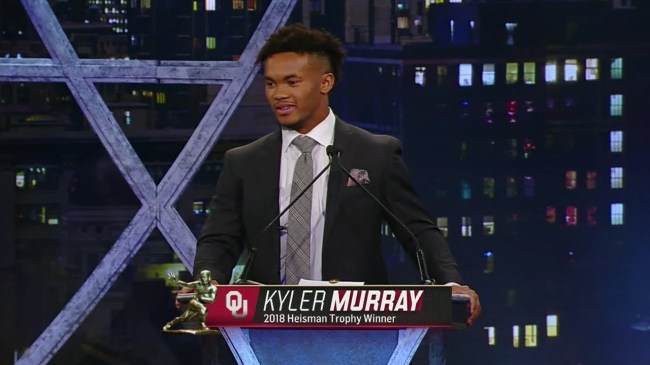 Kyler Murray To Decide Between NFL or MLB Career

Kyler Murray has until later today to withdraw his name from 2019 NFL draft consideration, a decision that would all but trigger the start of his professional baseball career (would report by 2.15); the Oklahoma quarterback (and outfielder) was selected 9th overall in May’s MLB draft by the Oakland Athletics. Long thought to be a better baseball prospect, few expected the 5’9 Murray to play football beyond his redshirt sophomore season in Norman, but following a season where he threw for 42 TDs, ran for 12 more and led his team to the College Football Playoffs, at least some NFL talent evaluators now peg Murray as a 1st round talent. It won’t be an easy decision for Murray though, should the Heisman Trophy winner opt to forego a professional baseball career in lieu of one on the gridiron, he would be required to return the $4.66 million he received to sign with the A’s.

Howie Long-Short: If Murray ultimately chooses to play baseball, his decision to use the NFL draft as leverage to squeeze more money from the A’s should be commended, but the NFL gives Kyler the opportunity to make more money over the first 5 years of his professional career – assuming he’s a 1st round selection. The 32nd pick (last of 1st round) in the 2019 NFL draft will sign a contract worth over $10 million, a deal that will include $5.3 million up front. While Murray got $4.66 million from the A’s, that would be “the only significant payday he would receive (playing baseball) for the next five to seven seasons.”

Of course, if Murray were to pan out as a player (and remain healthy), MLB would offer him the greatest long-term financial prospects. No NFL player has more than $100 million guaranteed on their contract. By comparison, at least 38 MLB players have deals that large, including 8 that will earn more than $200 million. Giancarlo Stanton has the sport’s largest contract, a 13-year $325 million pact.

Rodd Newhouse (JD, AWMA), a former NFL Player Personnel Director and the Founder and Financial Planner of 44 management. I asked Rodd, as a financial advisor, would you tell a player in Murray’s shoes to take the NFL or MLB route?

Rodd: If an NFL team thinks they can do something with you, god bless you. Take the money, take the fun, take the excitement and zeal of the NFL; you can always go back and play baseball.

Fan Marino: There’s a perception that Murray’s value is greater to the A’s and MLB than it is to the NFL with the league lacking young, marketable, African-American star power, but I think that it says as much about the state of the NFL as it does about MLB. At no time within the last decade has the league had more talent at its most important position. 12 NFL teams drafted a franchise signal caller within the last 4 drafts and Brees, Roethlisberger, Luck, Brady, Brady, Rivers and Ryan all finished with Top 10 QBR ratings; toss in Newton and Wilson and 65% of the league believes they’re set at quarterback. NFL teams (and the league) simply don’t need Murray as much as the A’s or MLB might.

Credit MLB for permitting the A’s to offer Murray a major-league contract, but it’s worth wondering if any prospect is worth “blowing up the mold for”; between 1965-2004, 23.5% of Top 10 selections in the MLB draft failed to play a single game in the major leagues.

I asked Rodd to put his Player Personnel Director hat on for a second, so that we could find out if Kyler Murray were the best player on his board, would he select him knowing there was a possibility the player could return to baseball?

Rodd: It’s going to be in your mind, but that’s what the whole pre-draft process is about; vetting the guy out so that you’re comfortable he’s going to be an NFL football player. You can’t stop the fact that he could always go back. If he was the best player on the board, I would take him.

Fan: How do you rate Murray as a prospect?

Rodd: Kyle Murray is 5’9 playing quarterback. That makes it hard to figure out if he’s a viable quarterback at the next level. When was the last time we had a 5’9 quarterback? Doug Flutie? Kyle has an uphill battle with that. I learned early in my scouting days that there are great college players and pro prospects, and those are 2 different things.