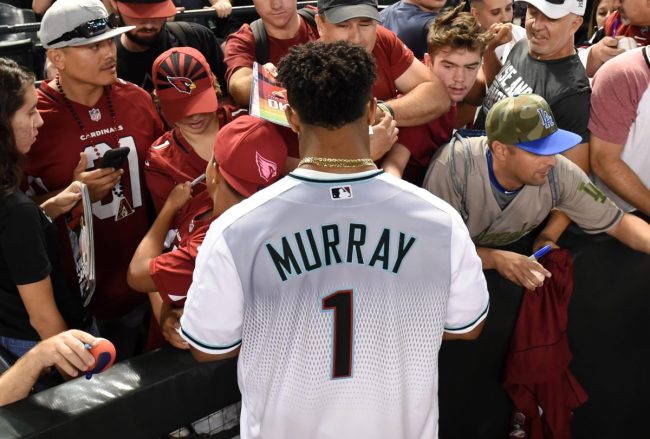 Kyler Murray reportedly has a “no baseball clause” in his recent deal with the Arizona Cardinals, which all but ends any MLB ambitions.

The quarterback made headlines earlier this week after signing a massive $230M contract to remain in Phoenix. That includes $160M in guaranteed money, making him the second highest paid passer in the NFL.

But while Murray has to be happy to with his lucrative agreement, the Cardinals did take action to protect themselves.

There are a couple of interesting clauses set forth in the new terms, including a “homework mandate” that requires the gunslinger to perform at least four hours of “Independent Study” each game week. While many find it silly, and honestly a bit embarrassing, Murray said in a past interview with the New York Times that he finds film study counterproductive.

“I think I was blessed with the cognitive skills to just go out there and just see it before it happens. I’m not one of those guys that’s going to sit there and kill myself watching film. I don’t sit there for 24 hours and break down this team and that team and watch every game because, in my head, I see so much.”

You can’t blame the Cardinals for covering their bases in that regard.

But there was reportedly another clause set forth in the terms, and it revolves around his future in a second sport.

Murray was not only a first-round selection for the Cardinals, but he was also a top pick for the Oakland A’s. He ultimately chose football, which seems to be the smart decision considering his new deal in Arizona is worth more yearly than the A’s payroll.

Still, if there was any small sliver of hope in testing the MLB waters, that door has officially been shut.

Mike Florio of Pro Football Talk reports that the Cardinals put language in the contract to ensure he won’t “participate in any type of baseball-related activity (including, without limitation, a tryout, workout, practice, scrimmage, exhibition or game) for any baseball team, in any baseball league.”

If he does so, Murray will be in danger of losing out on a chunk of his guaranteed money.

It appears that the Cardinals are serious about Murray’s focus on football with these clauses, which makes sense given the money they are paying. The team was able to reach the playoffs in 2021. Maybe with a bit more emphasis on his time under center, Murray can lead Arizona to a Super Bowl.