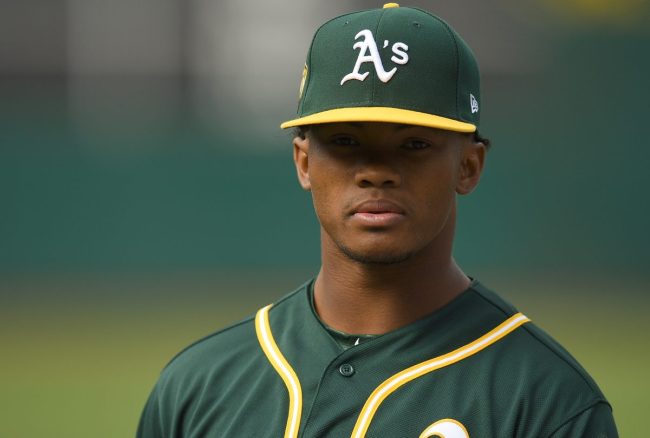 Kyler Murray is the happiest man alive this fine Thursday afternoon. The Pro Bowl quarterback just signed a five-year deal to remain with the Arizona Cardinals totaling over $230 million. That deal includes a $160 million guarantee, resulting in quite the payday for the fourth-year passer.

Murray’s new agreement makes him the second-highest paid signal caller in the league, a decision that some NFL fans are questioning. Nevertheless, it gives the gunslinger security in Arizona as he looks to get the Cardinals back to the playoffs.

The recent deal has to give Cardinal fans confidence in their newly wealthy passer pertaining to one key quarterback attribute. His decision making.

As most remember, Murray was not only a first-round NFL Draft pick, but he was also selected by the A’s in the first round of the 2018 MLB Draft. Luckily, he stuck with football.

With the new contract, the Oklahoma alum will earn just over $46 million a year in Arizona. That’s more than the entire active payroll for the Oakland Athletics.

According to Spotrac, the A’s adjusted active payroll is around $41.9 million, about $4 million less than what Murray will make in 2023. Fans have been quick to comment on Kyler Murray’s new deal, as well as the bullet he dodged in the MLB.

Social media was blown away by the fact that Kyler Murray will make as much as the entire Oakland roster. The A’s are known to be penny pinchers, but this stat is mindboggling.

Remember when there were people mocking Kyler Murray's decision to play football instead of baseball?

Kyler will make over $46 million a year in the NFL. The A's total active payroll is under $49 million this year.

I'd say he made the right choice.

Kyler Murray’s making $46 million a year now. The Oakland A’s entire payroll is $48 million. Turns out football was the right call after all.

Kyler Murray was once a highly touted prospect for the #Athletics. He nearly picked baseball over football.
How soon we forget.

His new salary is nearly the same as the entire A’s payroll!

I think he made the right decision #drumtogether #AzCardinals

Many noted the difference in spending between the the A’s and Cardinals for top talent. After all, Oakland’s lone invite had to catch a flight with a division rival to Tuesday’s All-Star Game.

This guy has an idea that could benefit both parties.

It’s safe to say that Murray made the right decision.