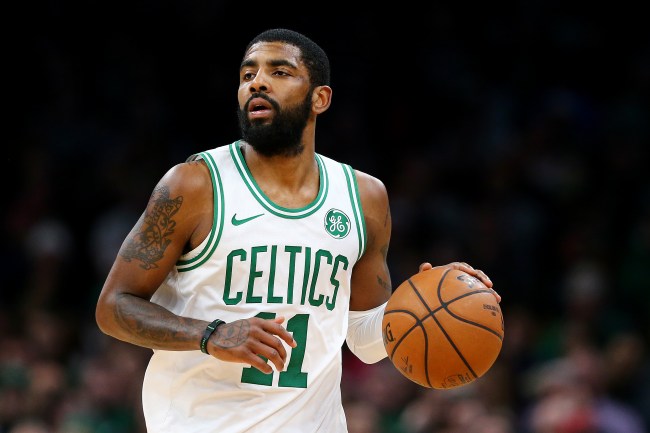 Kyrie Irving’s upcoming free-agency this summer is a major topic of conversation these days. Will the six-time All-Star and former No. 1 overall pick leave the Boston Celtics? Will he team up with another superstar like Kevin Durant and head to a big market like the New York Knicks? Will he reunite with former teammate LeBron James on the Los Angeles Lakers? Will he surprise everyone and go with a sleeper team? Nobody really knows what Irving’s thinking is right now, but, as one of the A-listers in this summer’s free agent class, everyone’s got their eyes on what he decides.

One person who is talking about Kyrie Irving’s free-agency is ESPN’s Senior Writer Ramona Shelburne, who hit up The Jump yesterday to discuss what’s in store for the superstar point guard. While most people think Irving’s destined for the Big Apple — with Stephen A. Smith saying it’s a “95 percent” chance that it happens — Shelburne pumps the breaks a bit, suggesting a darkhorse team that could be a “great fit” for the point guard’s skillset. That team? The Phoenix Suns.

While the Suns haven’t been relevant in, well, forever, the ESPN writer gives her reasons why the team could swoop in and pounce on Kyrie Irving, which would be a total shock and really throw off the NBA landscape if it happened. Here’s what Shelburne had to say.

“I can just see a world in which he goes to the Phoenix Suns, where that is such a great fit for him,” Shelburne said Tuesday on “The Jump.” “Look, we tried this this year where Kyrie goes into a situation where he tries to be a leader, he tries to carry a team to the next level, to a championship — it didn’t work. He couldn’t do it. If anything, you reset things where expectations are lower and you can have more of an impact on the culture. I know there’s been a lot of discussion about the Knicks and there’s been discussion about the Nets. I don’t really see how he fits in Brooklyn without them having to trade one of their backcourt (players), right?”

Given the young assets on the Suns, like Devin Booker and DeAndre Ayton, Kyrie Irving might at least take a meeting with the team to listen at what they have to offer, but, let’s face it, the team isn’t exactly a premier destination given its losing ways recently and, more so, the owner, Robert Sarver, who even threatened to move the team if he didn’t get his way on an arena renovation deal.

Kyrie Irving’s a top-10 player in the NBA, and he’ll have his pick of whichever team he wants to play for next. While the Suns might be a darkhorse, maybe, just maybe, the All-Star sees something most of us don’t and thinks it’s the best fit for him. Only time will tell.