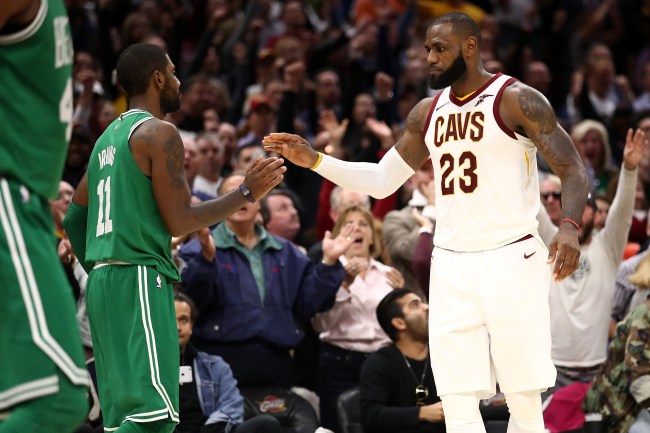 Kyrie Irving and LeBron James used to butt heads over who was “the man” while teammates together on the Cleveland Cavaliers, but the Boston Celtics All-Star point guard has grown to sympathize a bit with his elder superstar in recent years.

First, there was the above dap for one another during the first meeting between the two on different teams back in 2017, when Irving’s Celtics visited James’ Cavaliers on the first night of the NBA season that year. Then there was the phone call that came from Kyrie Irving to LeBron this season to apologize after learning that being a leader to young teammates is no easy task, which Irving said he did to “move forward with his life.” Suddenly, these two have a better relationship away from one another than they did while playing together.

Finally, there’s this: Kyrie Irving saying he’s “very empathetic” toward LeBron James seeing how his first season with the Los Angeles Lakers has gone — which, needless to say, hasn’t gone as planned.

Speaking with Joe Vardon of The Athletic, here’s what Irving had to say about what James has had to deal with while adjusting to a new team, new teammates and, more importantly, more losing.

“I feel for him. I really do. I feel for him,” Irving said. “I’m very empathetic towards it because how much he wanted to play during that time when he messed up his groin.”

The Boston Celtics star also called criticisms of James “a little unfair because of how much time he missed.”

To be fair, Kyrie Irving had to deal with something similar during his first year in a Boston Celtics uniform last season, when he ended up missing the final 34 games of the regular season, and the playoffs, following two surgeries to his knee and patella. So, mentally, more than anything, Irving can probably relate to what his former teammate, James, is experiencing.

In addition to his empathy for James, Irving also told The Athletic why being a superstar in the NBA is no easy task, even going as far as saying that a guy will “be attacked for the rest of your career.” But, hey, that’s just part of the territory when you’re getting paid millions to play a sport with high expectations, per Bleacher Report.

At just 26 years old, it seems as if Kyrie Irving is finally starting to figure some things out for himself. Whether that’s good or bad is up for debate — after all, Charles Barkley recently said Irving was “one of the most miserable people I’ve ever seen” — but it’s good to see him put a few things into perspective. More so, it’s kind of cool to see him relate with all that LeBron James experienced years ago; it’s just too bad they couldn’t figure it out together when still teammates.