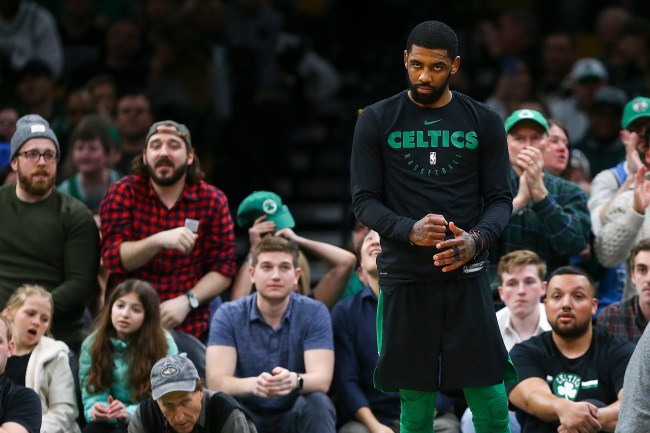 The Celtics’ 128-95 drubbing of the Warriors last night provided fans with a glimpse of togetherness and elation for a team that’s been in the shitter since the All-Star break (ok, and before).

Kyrie Irving, the Celtics’ best player, came to Boston to detach himself from LeBron’s shadow and helm his own team, but has demonstrated nothing but anger or indifference when asked to answer for the team’s season-long funk. Kyrie has expressed his frustration people always overanalyzing everything he does and all the rumors surrounding his status with the C’s. Just this week, he sulked to the media about never wanting to be famous. Many were quick to remind him that last year he starred in the feature-length film, Uncle Drew, the feature-length film developed for his brand and Pepsi Max advertisements.

Irving is obviously a complicated dude, or as Barkley calls it “miserable.”

In the wake of league commissioner Adam Silver’s hour-long panel discussion at the 13th annual MIT Sloan Sports Analytics Conference in which he called many NBA players “truly unhappy,” Barkley spun it into a rant about Kyrie’s attitude.

“He’s got to be one of the most miserable people I’ve ever seen.”

Charles Barkley had some words about Kyrie. pic.twitter.com/T6REMFoIW5

“And let me tell you something else: Kyrie Irving — I don’t know him that well, he seems like a good kid — but I’ve never seen a person so miserable. To have so much success, to have the world in the palm of his hand, he’s gonna make $40-50 million dollars a year for the next 10-15 years. He’s already won a world championship, he’s in movies. But he’s got to be one of the most miserable people I’ve ever seen.

“He wanted to go to Boston because he wanted to have his own team. And what a lot of these guys don’t understand is, when you’re a star — and I’ve been a star — you get all the credit, but all the blame. That ain’t right, that ain’t fair — but that’s just how it is.”

Kyrie Irving will most certainly be reminded of Barkley’s comments and he may just retire then and there.