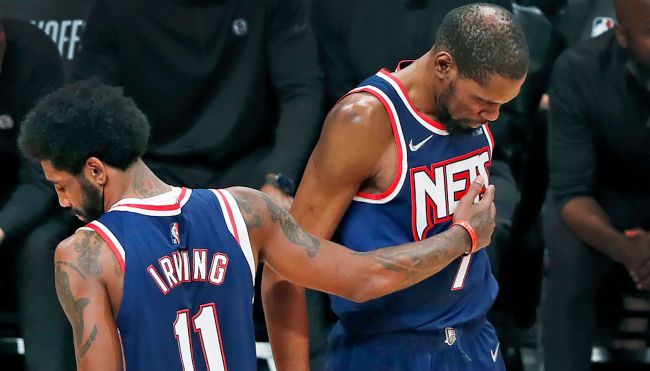 After all of the discourse that surrounded Kyrie Irving this year, the controversial Brooklyn Nets point guard ultimately ended his headline-making 2021-22 season with a whimper as he and the rest of the Nets got swept by the Boston Celtics.

While Kyrie Irving performed to his usual superstar standards in Game 1 against the Celtics — he racked up 39 points against his former team — his performance slipped from there, as he scored just 10, 16, and 20 points in the final three games of the first-round series.

Now that the season is officially over for Irving, the point guard is now able to look at the season in the past tense, which is exactly what he did last night during his postgame interview.

In a surprising moment of honesty, Irving admitted that during the “emotionally heavy” season he “felt like I was letting the team down at a point where I wasn’t able to play” and that his behavior “became a distraction at times.”

Kyrie Irving talks about the challenges the Nets faced this season pic.twitter.com/e4y702Miyy

Despite being regarded as one of the most talented offensive players in the NBA, Irving’s return to the Nets ultimately did the opposite of helping the franchise achieve their championship goals, as the Nets’ winning percentage dropped by nearly 25% since his return to the team in early January.

In addition to his admission about letting the Nets down, Irving also indicated that he wanted to return next season and that he wants to “manage the franchise” alongside Durant, Nets owner Joe Tsai, and general manager Sean Marks.

RELATED: The Nets’ Winning Percentage Has Dropped By Nearly 25% Since The Return Of Kyrie Irving