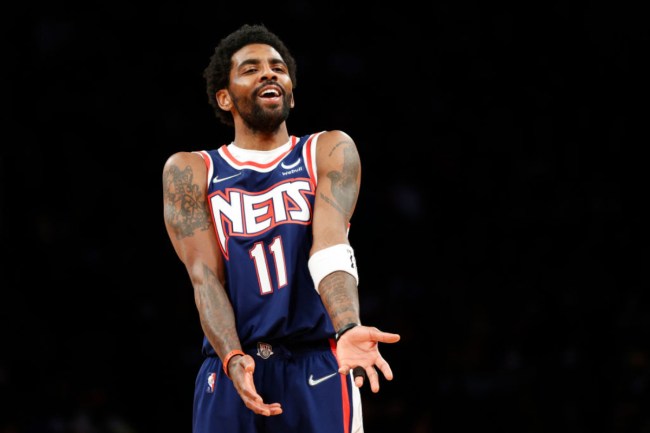 Kyrie Irving has, for quite some time, had one of Nike’s most popular signature shoes, but it doesn’t sound like that will be the case for much longer.

According to ESPN’s Adrian Wojnarowski and Ramona Shelburne, Nike is “unlikely” to extend their contract with Irving once his current deal runs out following the 2022-23 NBA season.

Nike’s biggest concern about the Nets guard is the “uncertainties surrounding Irving’s NBA future.” Irving’s current deal with the company is reportedly worth $11 million per year.

ESPN’s report details the “turbulence” surrounding Irving noting the Nets’ noncommittal stance on giving him a long-term contract and the fact that he is unvaccinated, which forced him to miss a majority of Brooklyn’s season.

It’s also worth remembering that Irving bashed the Nike Kyrie 8 shoe last July calling it “trash” while insisting he had nothing to do with the design of the sneaker.

Given how popular Kyries have been over the years, among fans and basketball players at all levels, including players all around the league, the news of Nike backing out is surprising.

Perhaps Nike is looking to bring a new, young player into the fold and create a new signature shoe. Memphis point guard Ja Morant comes to mind right away.

Kyrie got the best shoes in the game… This a big L for @Nike https://t.co/CJQZYsuQ0f

Ja Morant is UP NEXT https://t.co/CEF86rDlQC

Nike on a mission to make all the sneakers I like to play in the most impossible to get https://t.co/FVgCAZ46yq

About 80% of the youth basketball players I train wear @KyrieIrving shoes. Definitely would be an interesting move for nike. https://t.co/0qLfbKIaT1

This is a huge L by Nike. Kyries shoes are some of the league’s and fan favourite. https://t.co/TMWT0Re5WQ

He has some of the most popular and highest selling ball shoes, they would be brain dead to not extend him https://t.co/3Vt14YWsj1