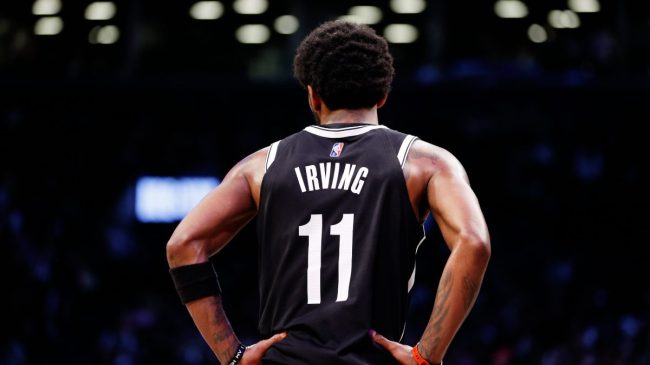 The Kyrie Irving saga continues to evolve this offseason.

It’s been reported that the star point guard is unhappy in Brooklyn. After three seasons with the Nets, Irving seemed content to build a foundation with fellow teammate Kevin Durant.

Unfortunately, the Nets have been hesitant to offer Irving a long-term deal due to his vaccination status and history of injury. Just last year, the team had to watch their superstar sit on the bench for home games due to an NYC COVID mandate. They aren’t interested in paying for a part-time player.

Brooklyn has even given him the green light to seek other options on the NBA market.

The most likely destination continues to be the Lakers. It would give Kyrie an opportunity to team back up with LeBron in pursuit of another championship.

And it appears that the Lakers are very interested in adding the point guard, who would provide a huge upgrade over Russell Westbrook.

The only problem? The Nets aren’t listening to any of Los Angeles’s potential trade packages.

The Lakers want Kyrie Irving, but the Nets aren’t interested in their trade packages

According to a recent report from Adrian Wojnarowski, the Lakers are the only team currently pursuing Kyrie Irving in a potential sign-and-trade, but it doesn’t look like the Nets are interested in LA’s trade packages.

Other than the Lakers, there are no known teams pursuing a sign-and-trade for Kyrie Irving, per @wojespn

The Nets aren't believed to be interested in the Lakers' packages pic.twitter.com/2uR8pHM1Gm

So, the only team that’s pursuing Kyrie is a team the Nets don’t want to do business with. That presents quite the dilemma. That, combined with the fact that Irving would miss out on $30M by playing with LA as opposed to Brooklyn seem to signal that he’ll be back with the Nets when the season starts.

That is, unless another potential suitor comes calling.