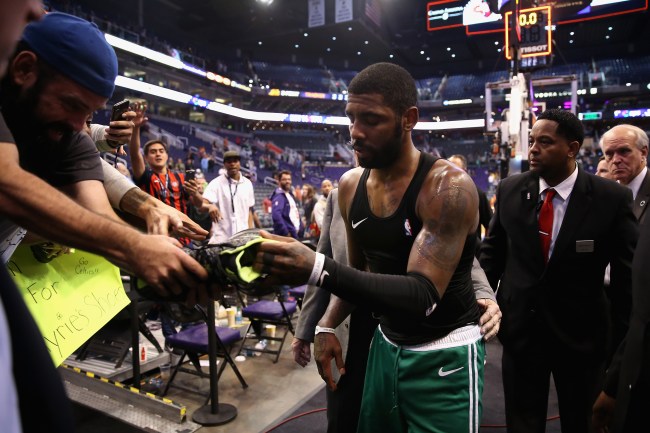 If there’s one thing we know about Kyrie Irving, it’s that he really, really likes to change up the designs of his Nike kicks. The Boston Celtics star — for how much longer that is, who knows? — is already on his fifth customized sneaker with the brand, and, over the years, we’ve seen a bunch of different colorways and looks for Irving’s shoe, including a Friends-inspired one because of his love for the longtime TV show.

Given Kyrie Irving’s bold decisions while working with designers at Nike, we shouldn’t be too surprised at the latest version of his Kyrie 5 to be released soon — which reveals a partnership with Nickelodeon’s classic character, Spongebob Squarepants. With a yellow-bodied upper with a couple of unique details, like the rippled Nike Swoosh on the side, which is really cool of the brand to do, these shoes are really one-of-a-kind for Sneakerheads. Take a look at a quick glimpse of the new shoes below, courtesy of the Instagram account leo_zd_37.

From the custom logo on the tongue, to the Nickelodeon logo sitting in the middle of the laces, Nike absolutely killed it with this look, and Kyrie Irving fans are sure to snatch these up as soon as they’re available. Unfortunately, we don’t have further details about when that might be, so keep an eye out for any updates from around the Interwebs.

As mentioned, Kyrie Irving has a penchant for releasing some of the most stylish and unique kicks from any athlete, so here’s a look at some of the best, in my personal opinion.

I’m not really a shoe collector, but, damn, if I were, those would be some of the ones I’d have to drop some serious coin on in order to keep hidden in my closet. The things are straight fire.