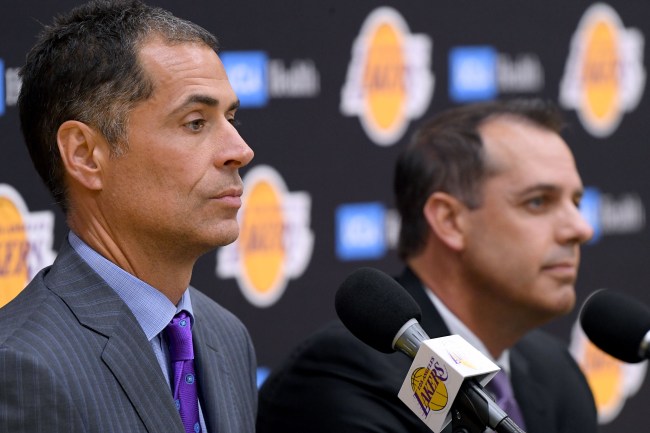 Last week the LA Lakers appeared to have made the deal of the century when they traded several players and picks for Anthony Davis but were somehow able to keep Kyle Kuzma.

Unfortunately, due to the negotiated timing of the trade, the Lakers are now left scrambling to increase their salary cap space to be able to sign a third superstar this offseason.

Apparently, this entire mess could have been prevented if the Lakers had negotiated things beforehand with the Pelicans but according to ESPN’s Ramona Shelburne Rob Pelinka never had that conversation during trade talks and had to call back once the deal was done.

“It’s all so unnecessary, too. Like, the way this trade was constructed, this should have been first and foremost on their minds as they were talking to the Pelicans in a way where they set themselves up. If this was really their plan — that they want to have a third star — this should have been central to the conversations with the Pelicans and my understanding is that it was not. They went all the way down the road and it’s been described to me as a, ‘The Lakers called back,’ after everything had been discussed about this — the timing.

Now the Pelicans are playing hardball and don’t want to accommodate the Lakers by moving the trade date back to July 30.

The Lakers could have asked New Orleans to wait to complete the deal July 30, when the salary for the No. 4 pick could have been included in the trade, allowing the Lakers’ outgoing salary to fall within 125% of Davis’ salary with or without the bonus, making the trade possible. In that scenario, Los Angeles would have been able to use $32.5 million in cap space for free agents before finalizing the move.

But the Pelicans are unwilling to move the trade back to July 30, according to league sources. As a result, the Lakers are now exploring the option of shedding the salaries of the remainder of the roster (except for Kyle Kuzma), including Moritz Wagner, Isaac Bonga and Jemerrio Jones. Jones’ $1.4 million contract would need to be guaranteed to be included as part of the trade.

If these reports are true it seems like a huge oversight by Rob Pelinka and Lakers front office that could cost them in the long run.