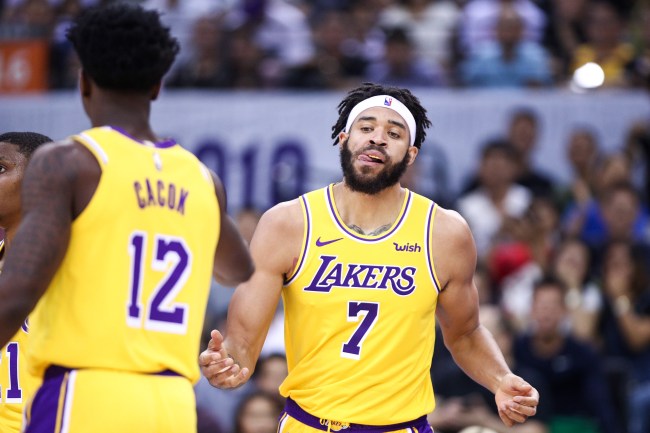 It’s only the preseason but JaVale McGee and the Lakers pulled out all the stops last night to beat down the once-mighty Golden State Warriots.

Last season LeBron James told the media that he had personally recruited McGee to join the Lakers because he was impressed with the big man’s basketball IQ.

“I played against him in the last two NBA Finals and I wanted him on this team because I know what he brings,” J”It’s his energy, his energy level, his ability at the rim. If you don’t have that on your team, you’re not going to have much, man. You need to have people with high IQ, which he’s got. That’s why I wanted JaVale to be part of this team.”

During last night’s Warriors-Lakers preseason game, JaVale showed off some of that basketball IQ when he faked an injury to catch the Warriors off guard for an easy score.

JaVale sneaky as hell for pulling that off 😭 pic.twitter.com/otFyzzqzJm

While it was an ingenious move, many fans wondered why JaVale wouldn’t save it for later in the season when the Lakers could actually use it.

Why would you bust this out in preseason? This is an NBA Finals move.

Why use that now

Why would you do that in a meaningless game ? 🤦‍♂️

Don't show 'em all your tricks in the preseason! Doh.

Hopefully, JaVale was just practicing and pulls out the fake injury move during the playoffs.