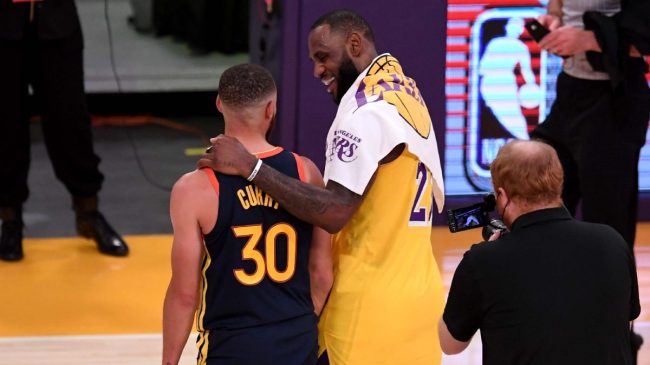 After being anointed preseason championship favorites, the Lake Show limped to a 31-48 overall record. With just three games remaining on the slate, Los Angeles has officially been eliminated from NBA Playoff consideration.

There were a number of things that went wrong for the Lakers this year.

First were the injuries, which Anthony Davis alluded to in a recent press conference. There were also concerns with poor effort, which helped lead to the firing of head coach Frank Vogel.

One thing that wasn’t lacking, though, was star power.

The Lakers possessed a three-headed monster in James, Davis, and guard Russell Westbrook. The trio combined to average more than 70 points a game when on the floor. James led the way with 30.3 points a night.

Unfortunately, things didn’t work out this year, but it’s never too early to start thinking about the future.

And LeBron James already has his eyes set on the next NBA star he’d like to bring to LA.

LeBron James Reveals NBA Star He’d Like To Play Alongside

LeBron is known for bringing talent with him wherever he goes.

It started with the big reveal in South Beach, bringing together James, Chris Bosh, and Dwyane Wade. He was also instrumental in getting both Davis and Westbrook to Los Angeles, though he’s drawing criticism for that move now.

Now, he’s already trying to recruit another star to play alongside him.

James joined the crew at Uninterrupted to discuss the player he’d be most interested in playing with. His answer shouldn’t surprise many.

Bron says he would love to play with Steph.

“Stephy Curry is the one that I want to play with for sure in today’s game.”

Curry is one of the game’s best shooters, and he’s helped lead the Warriors 50 wins on the season. Teaming up with LeBron would make them the most dynamic one-two punch in the NBA.

Time will tell whether this match comes to fruition over the offseason. But LeBron is taking his shot on Curry as he looks to land another ring.