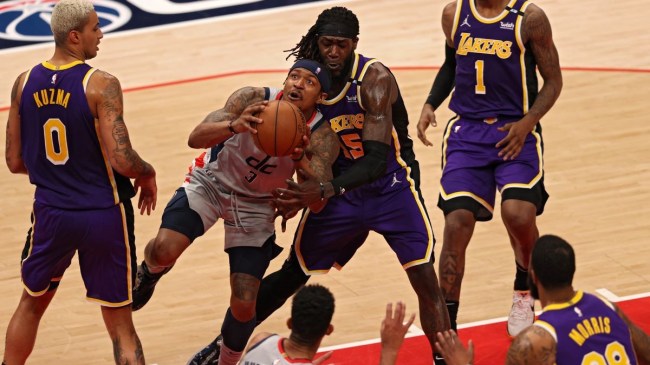 The Los Angeles Lakers, and more specifically LeBron James, have been linked to a move for Brooklyn Nets star Kyrie Irving for what seems like an eternity.

Now it appears that deal is unlikely to happen for a number of reasons. For one, the Lakers just don’t have the assets to make the deal happen. The 2-9 team clearly has one of the worst rosters in the league and any deal would have to involve the still-struggling Russell Westbrook. Westbrook’s contract is seen as an albatross across the league and the Lakers have limited draft capital to attach to him in any move.

Then there’s the matter of Irving, who is currently sidelined by the Nets after making, and then doubling and tripling down on antisemitic comments.

But now it appears that the Lakers have moved on. The organization and GM Rob Pelinka are reportedly setting their sites on another East coast superstar instead.

Bleacher Report’s Chris Haynes reported on Thursday that Los Angeles has changed its focus away from Irving. Instead, the Lakers are eyeing another superstar guard.

A star player whom the Lakers are known to covet is Washington Wizards shooting guard Bradley Beal, sources say. Going after the 10-year veteran would only be an option if Beal were to request a trade, a tactic he has been reluctant to exercise.

That backs up a recent statement by Sports Illustrated’s Howard Beck. Beck claimed that the Lakers were waiting for a “specific player” to come available before making any moves.

Beal would need to make a trade request in order for that to happen. He’s been reluctant to do so thus far. Beal signed a five-year max extension with the Wizards in the offseason.

Basketball fans aren’t buying that there’s any chance of a move actually happening.

For what??? Wenyan gabriel, russ and a 2029 first?? Lmaooo no fuckin shot https://t.co/mNyYC3xjpe

They’re also “known to covet” any decent player in the league https://t.co/AUBVBVeG6y

Wizards: “What do you have to offer us.”

The Wizards are currently 6-6 and sit in sixth place in the Eastern Conference standings.