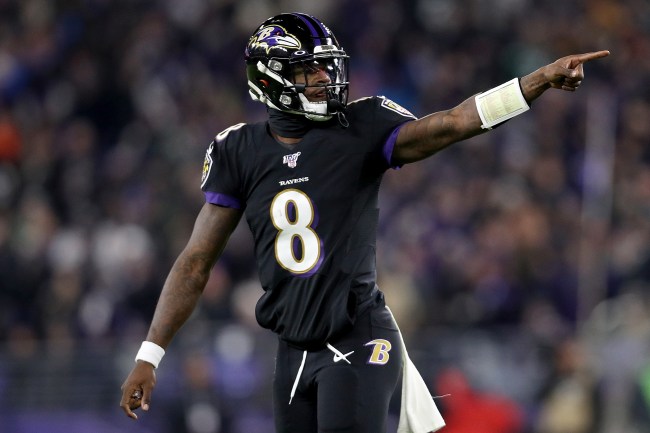 Do you have eight minutes Just 8? Of course you do. There’s less than two weeks until New Years, if you’re doing anything in your office aside from watching YouTube videos on the toilet until your legs fall asleep, you’re a pathetic sucker. And I say that with the utmost respect, sucker.

With your next eight minutes, watch the mic’d up footage from the game that Lamar Jackson broke Michael Vick’s single-season quarterback rushing record.

I’ve hated the Ravens my entire life as a Pats fan (hold your applause), but watching this I found myself eating crab cakes and snorting Old Bay.

Can we talk about his record-breaking run (at the 1:15 mark) for a second? How the hell does sentient being not made of chromium steel pop up from a hit like this? How?

This should kill a man.

Lamar Jackson just broke Michael Vick’s record for the most rushing yards by a quarterback in a single season. Jets made him earn it, too. pic.twitter.com/SbY2W04kBg

I’m trying not to be hyperbolic over one mic’d up video, but literally everything Lamar Jackson said to his teammates in that video either appreciative or encouraging.

[After Mark Andrews sets the Ravens franchise record for most touchdowns by a tight end] “Aaaaahhh!”

“We need to be scoring…we putting the defense out there with no points.”

[Going down the bench to dap everyone up] “All day, ya’ll keep going.”

I won’t say that I’m a Ravens fan or a Baltimore supporter, but I think I’m at the point where I consider saying ‘The Wire Is The Best Television Show Ever Made‘ is a personality trait.