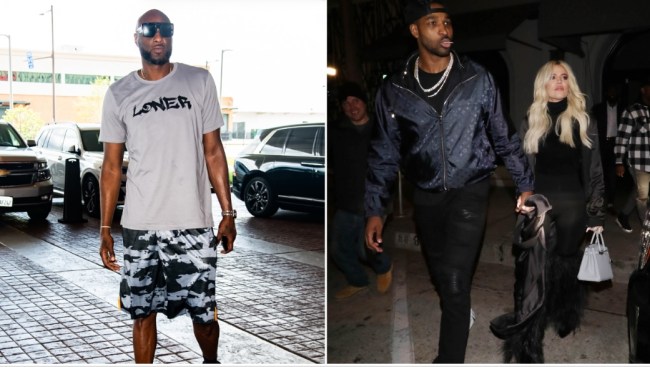 Lamar Odom wants to get back with Khloe Kardashian despite the fact that Tristan Thompson wants to kill him.

Over the weekend, Odom decided to shoot his shot at his ex-wife Khloe, who recently broke up with Thompson due to several cheating scandals. Thompson wasn’t thrilled with Odom and threatened to kill him for complimenting Khloe in an Instagram post.

According to a report from TMZ, Odom didn’t mean to piss off Thompson but he does want to get back with Khloe now that she’s single.

Sources close to Lamar tell TMZ … he wants to rekindle what he once had with Khloe and he thought Friday’s comment on Khloe’s IG post was a perfect time to get her attention, seeing as she’s not with Tristan anymore.

Lamar and Khloe were married from 2009 to 2016 … and our sources say he thinks Tristan is fumbling the bag with Khloe. Quite frankly, we’re told LO wanted to see where his comment might lead the exes.

We’re told Lamar wasn’t trying to be disrespectful, he just figured it was fine to shoot his shot because Khloe and TT are broken up again … after new allegations he was cheating.

So far, it hasn’t led anywhere — Lamar’s had no dialogue with Khloe or Tristan. Not yet.

This all sounds like it’s going to end with Odom and Thompson getting into a fight.