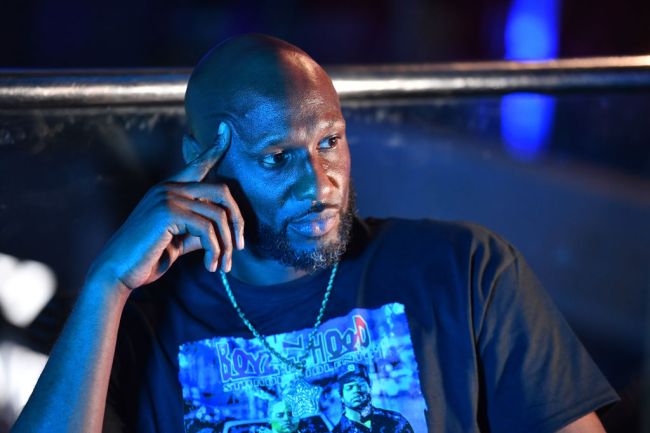 Former NBA player Lamar Odom is not happy with his ex-wife Liza Morales consistently putting him on blast over missed child support payments he believes are unfair considering his children are currently adults.

During a court proceeding this week, Morales’s lawyer claims Odom owes her $91k after he stopped his child support payments in June 2020.

Odom was sued last month by ex-gal pal Liza Morales, who claims the athlete hasn’t honored a 2015 settlement agreement over their two children since June 2020.

Morales’ lawyer, Abraham Borenstein, told the judge that Odom hasn’t been paying child support and he owes her over $91,000 through July.

Borenstein also said Odom’s fallen behind on nearly $83,000 rent for a West Street apartment in Lower Manhattan, where Morales lives with their kids — prompting the landlord to start an eviction case against her.

The judge hearing the case went on to blast Odom for deciding to skip out on his child support payments after allegedly made $40k in a celebrity boxing match.

Cooper asked Morales — a mainstay on VH-1’s reality show “Basketball Wives” — to testify about what she knows about Odom’s income.

“He is definitely making income,” Morales said by video. “He just got a check for that boxing match. He is doing a lot of things regarding his brand. He has a CBD company that he works with.”

If Mr. Odom received money from his celebrity match, I’m sure you’d want to get a judgement so you can take action as soon as possible,” Cooper said encouraging Borenstein to file a judgment for him to sign as quickly as possible.

Since Odom didn’t appear in court to defend against the claims, the judge granted a default judgement against him for all the money Morales says she’s owed including for attorney fees.

Odom took to Instagram for fire back at his ex-wife and the judge. According to Odom he gives his children, who are both over the age of 18, monthly allowances. The former NBA player went on to blast his ex-wife by telling her to get a job to fund her lavish lifestyle instead of relying on him.

I never air out my personal business because it’s personal but I have had enough.
.
I was never married to my kids mother. I took care of her from the second she became pregnant and even after I was married I still paid her bills. I AM NOT RESPONSIBLE for a GROWN ASS WOMAN!! Once my children became adults my duties were done! I told her to GO TO WORK! MOVE into an affordable home, she didn’t listen and that is NOT on ME!
.
The news, the media, the public loves to vilify a man, call him deadbeat, say how terrible he is as a man but what about a woman who refuses to get off her ass and make a living for herself? She is just as responsible for taking care of our now ADULT children as I was so why isn’t she held to the same standard?
.
Enough is enough. I do not get pension from the NBA until I’m 46. I do not own a CBD line, I did not get paid $40k from Celebrity Boxing 🥊 🥺

Am I working ? YES
Am I building a solid brand ? YES
Do I send my kids money monthly ? Hell yes !
Do I support Liza? No !!! And I shouldn’t be made to either! So I will have my day in court, I was never served papers to appear and I will be filing an injunction to this bitter Judges order.

To all the women out here who are mothers taking care of their kids I salute you! ❤️

To all the fathers who take care of their kids but receive NO credit, I feel you and salute you too! ❤️

To the Liza’s who sit on their asses and expect a handout, who lie and manipulate their children, who use their children as pawns, who creates stories and scenarios to attract attention, may you seek healing and counseling for your brokenness ~ you need it. 🙏🏽
.
.