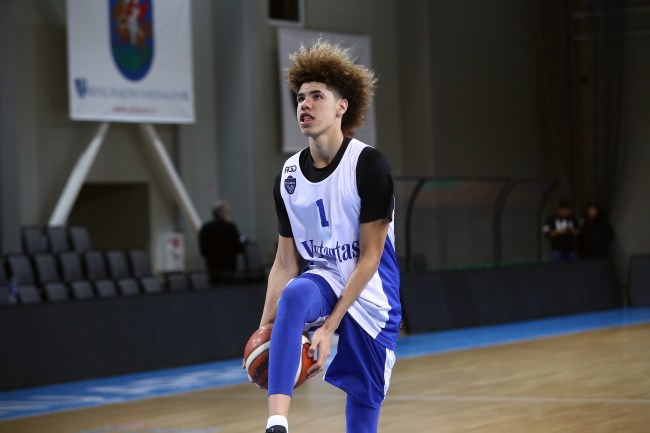 Last year, LiAngelo Ball managed to avoid sitting for years in a Chinese prison after deciding to steal a pair of authentic Louis Vuitton sunglasses instead of doing what normal people visiting China do and go to a market to buy some knockoffs. Ball was suspended from the UCLA basketball team as a result of the incident, but his real punishment was getting exiled to Lithuania to play with his brother after some dude on Twitter convinced their dad it was a good idea.

Plenty of people were skeptical of the decision and after a few months playing in cities most Americans wouldn’t be able to pronounce, LaVar Ball decided to end the experiment. LaMelo’s former teammates made it very clear how they felt about the teenager after his exit and based on his reaction to a prank they pulled while he was still with the squad, the feeling was mutual.

The most recent installment of the self-indulgent reality shown known as Ball in the Family featured a prank related to another country filled with places most Americans wouldn’t be able to pronounce: Kazakhstan. At the 16-minute mark of the episode, LaMelo walked into the locker room to discover his teammates had posted a bunch of pictures comparing a photo edited to make him resemble Borat next to a picture of Sacha Baron Cohen’s greatest achievement.

I for one thought the prank was very nice and I liked it so much I’d show it to my wife if I had one. High five!