Landon Donovan Pissed Off The Entire U.S. Soccer Community For Supporting Mexico In The World Cup 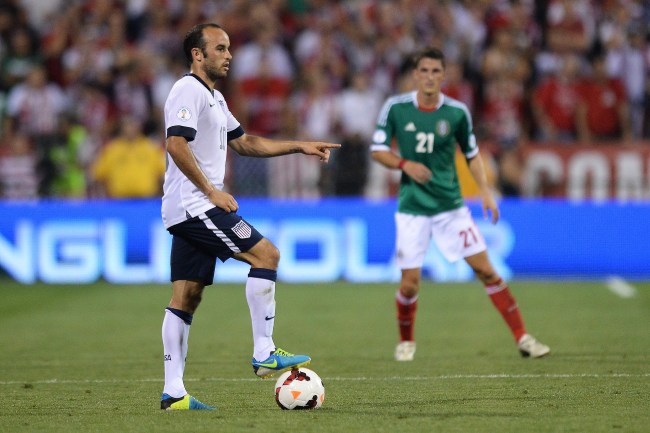 As citizens of 32 countries flood into local bars to root for the native squad in arguably the biggest international sporting event in existence, Americans are forced to watch from afar like 325 million Steven Glasburgs eating our pudding in solitude.

For American soccer fans, how could it be any worse.

Landon Donovan would like you to hold his beer.

Donovan, one of the few U.S. soccer legends who scored the game-winning goal of his life against Algeria in the 2010 World Cup, was surprisingly left off Jurgen Klinsmann’s final roster in 2014 and there may be some lingering feelings of disdain four years later.

The 36-year-old infuriated USMNT fans and made our founding fathers spin in their graves when he posted a lame ad declaring his allegiance for U.S.’s biggest soccer rival in this year’s World Cup in a paid partnership with Wells Fargo.

The tournament is here! USA fans, our team may not be in Russia, but our neighbors to the south are. So join me and their proud #sponsor @WellsFargo to cheer on our other team, Mexico @miseleccionmxEN. ¡Vamos México! pic.twitter.com/YIifLGCT0D

Donovan’s stance was met with widespread opposition by some influential figures in American soccer.

I’d rather cut off my toe than “root for 🇲🇽” & I’m on the outside on this one, but how could I root for my/our rival?! Imagine any 🇨🇱 players rooting for 🇦🇷 today?! I can’t imagine how @AmericanOutlaws would feel if I rooted for Mexico….but then again I’m old school. https://t.co/wN910307vI

Cobi Jones, the USMNT’s all-time leader in caps and a member of the National Soccer Hall of Fame:

Carlos Bocanegra, former U.S. soccer captain and current member of the US Soccer Board of Directors.

In response to Bocanegra, Donovan posted-then-deleted this:

You grew up in SoCal and owe much of your soccer skill to playing with Mexicans. Your father is of Mexican descent (🤦🏻‍♂️). Look around our country, are you happy with how we are treating Mexicans? Open your mind, stand for something & remember where you came from

And then there was this funny tweet by a random soccer fan:

Listen, I know a lot of people are mad about the sponsored Landon Donovan World Cup tweet, but I think it's just brutally honest… pic.twitter.com/FsRAYV6ZSg

On Sunday Donovan posted a response on Twitter to explain his partnership and Mexico fandom.

At the end of the day, perspective is key. Donovan has given more to soccer in this country than most anyone and the fact that we’re forced to address this petty controversy is further evidence that the billions of dollars being pumped into the United States soccer ecosystem better pay off when the next World Cup comes around.

[h/t Deadspin, For the Win]