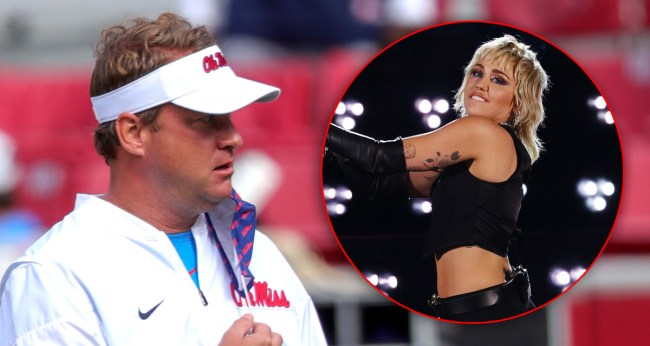 Ole Miss head coach Lane Kiffin is such a big fan of singer Miley Cyrus that he have her a shout out while blasting her music during Thursday’s Ole Miss football practice.

“Hi Miley,” Kiffin said to the camera, tagging her in a video he posted to Twitter.

Great job @MileyCyrus 🎶 got us going this morning #ComeToTheSip practice 8 let’s get it @OleMissFB pic.twitter.com/tYjgLBG7Gn

So, why would a 45-year-old college football coach be such a big fan of the 28-year-old musician?

Because back in 2013 while Kiffin was still the head coach at USC, talking head Paul Finebaum, who was campaigning for Kiffin to be fired, compared the coach to the former Hannah Montana star.

Kiffin referencing Cyrus at practice on Thursday comes just a couple weeks after he was on Paul Finebaum’s show and made things awkward when he brought up that time back in 2013 when Finebaum made what he obviously felt was a negative comparison between the coach and the pop singer, saying, “In some respects, Lane Kiffin is the Miley Cyrus of college football. He has very little talent, but we simply can’t take our eyes off him.”

“Let’s make sure everybody knows, you still owe me, because you did get me fired at USC that Saturday morning by saying I’m the Miley Cyrus of college football,” Kiffin reminded Finebaum.

“For those of you who didn’t see this, I’m blushing even beyond the normal blush of makeup,” Finebaum replied after stuttering. “I said that on College Gameday. It was my first year at ESPN, and coach, I was trying to make a name for myself. And unfortunately, you just happened to be the next victim. I do feel badly about that.”

Obviously the Ole Miss coach is not ever going to just let Finebaum completely off the hook, despite the two appearing to be a on relatively good terms now.