Lane Kiffin Put Paul Finebaum In His Place About A 2013 ‘Miley Cyrus’ Comparison, It Was Awkward 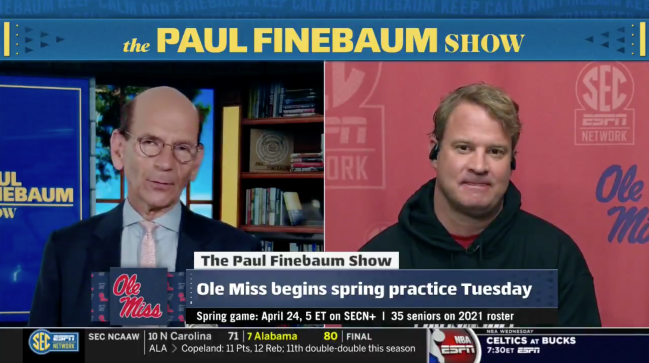 Lane Kiffin does not care to mince words. He made an appearance on the Paul Finebaum show on Monday afternoon and things got awkward in a hurry.

After Finebaum paid him an inadvertent compliment about his youth, Kiffin laughed that it was the only compliment that he had ever received from the SEC Network radio and television host. Finebaum tried to make a joke back, and it did not land, which made things awkward. As he tried to move on, Kiffin stepped in to put Finebaum in his place, reminding him of the time that Finebaum called him the Miley Cyrus of college football shortly before he was fired at Southern California.

Kiffin was famously fired on the tarmac after USC lost to Arizona State in 2013 and Finebaum’s comment was a national storyline before the game.

“How did someone like Lane Kiffin ever get these jobs?” Finebaum said. “How did he land the Raiders job? At Tennessee? And particularly the one at SC? People think it’s because of his father, Monte, the great defensive wizard. In some respects, Lane Kiffin is the Miley Cyrus of college football. He has very little talent, but we simply can’t take our eyes off him.”

As Kiffin mentioned, the Sun Devils hung 63 points on the Trojans that day, but he has not soon forgotten about the comparison that was made.

Finebaum was honest in his response, admitting that he was in a point of his career when he was trying to make a name for himself, and remembered a few weeks after the firing when Kiffin was on College Gameday and thought he was going to “kill” him. It was a humbling moment for Finebaum, both back in 2013 and on Monday when Kiffin set the record straight.

It has been almost eight full years since the whole situation played out, and the two are on good terms now, but it seems to be something that they both have held onto. Finebaum addressed the comment in 2015 as well.

Kiffin is entering his second year as the head coach at Ole Miss and is set to begin spring practice on Tuesday. The Rebels finished 5-5 in 2020 with close losses to No. 5 Florida and the eventual national champions Alabama, and capped the year with an Outback Bowl victory over No. 7 Indiana. Something special is cooking in Oxford and the 45-year-old is at the forefront. ALL ABOARD THE LANE TRAIN!

You Ain't Seen Nothing Yet!