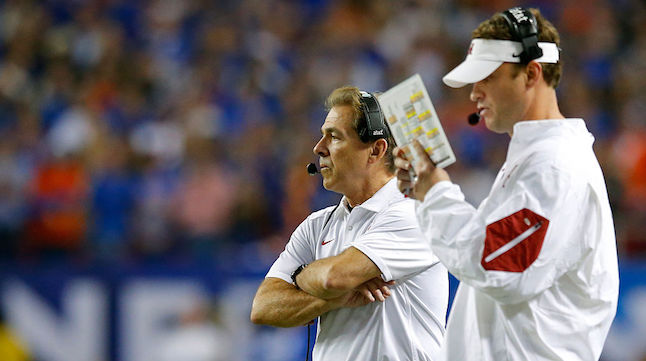 To say Alabama Crimson Tide coach Nick Saban has a rocky relationship with his former offensive coordinator Lane Kiffin would be a bit of an understatement. Saban famously relieved Kiffin of his duties prior to last year’s National Championship loss to Clemson after he decided to leave the program for Florida Atlantic, and Saban wasn’t afraid to visibly voice his displeasure with some of the OC’s decisions (however, the coach was nice enough to give Kiffin ar ride after the team bus left without him after Bama took home the title in 2016).

Despite their torrid past, it appears Kiffin just can’t bring himself to get over their breakup. ESPN’s Chris Low recently profiled the man who has made it his mission to turn around FAU’s football team, and he revealed a slightly depressing fact about the current state of their relationship:

Kiffin says he still sends text messages to Saban, though Saban doesn’t text back — with anyone. However, Kiffin has conversed with Saban’s wife, Terry, via text message.

Low’s claim that Saban never texts anyone can be traced back to comments he made at the Sugar Bowl in 2014 in which he affirmed his old man status by claiming he doesn’t have enough of a grasp on technology to figure out how to respond. However, I can’t help but picture Kiffin hitting “Send” and starring at his iPhone for fifteen minutes in the hopes he’ll get a response (which would undoubtedly come in the form of a green text bubble because there’s no chance Saban doesn’t still have a flip phone.

At least he has Terry.