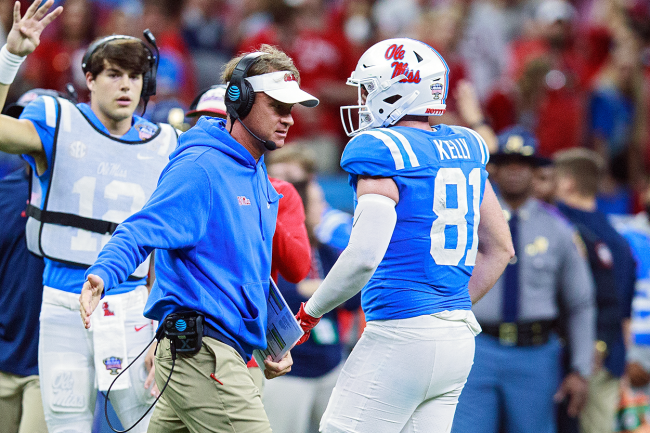 Ole Miss football is on the rise. After years of mediocrity under the previous staff as the program dealt with significant NCAA sanctions, the Rebels hired Lane Kiffin in December of 2019.

Since then, Ole Miss has played in the Outback Bowl and Sugar Bowl, signed the top-ranked transfer portal class, and has returned back to a national brand. Kiffin has played a huge role in that relevance and the team has debuted a pair of new uniforms under his watch— powder blue jerseys and powder blue jerseys with a fresh white helmet.

The potential uniform is extremely different from anything else out there in college football and it includes a unique partnership.

On Wednesday morning, the Twitter account for Juice Kiffin — Lane Kiffin’s dog — tweeted out a photo of himself taking a nap. The picture included some mock sketches for uniforms and even a mock helmet sitting on the table.

The mocks are branded with Realtree, the self-proclaimed “#1 resource for camouflage.” Ole Miss has ties to the company. Its founder caught passes from Archie Manning and his family, which remains closely tied to the Rebels, continue to have a significant role in Realtree operations.

The mock helmet and cleats are branded with Realtree. They also have a powder blue camouflage element to them.

In addition, the leaked sketches reveal a white jersey with powder blue numbers. Ole Miss does not have that combination yet.

Now, these sketches may not become reality. They might just be ideas that are being tossed around. But it’s worth noting!