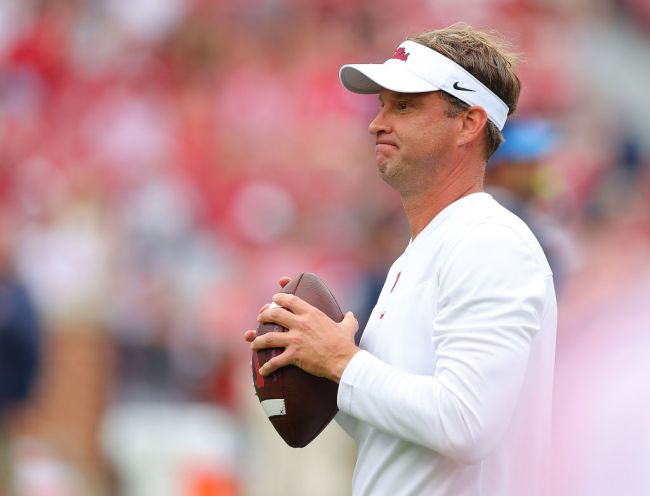 You don’t have to be an Ole Miss fan to know that Lane Kiffin is a superstar on Twitter. The man is extremely active on the social media app and has picked up over 500k followers, which is nearly double the following Ole Miss football’s official account has.

Simply put, Kiffin is different seeing as how he’s actually authentic and lighthearted on Twitter. Most high-profile coaches stay away from social media in general, but Kiffin embraces it because he sees it as a tool.

Kiffin recently joined ‘The JBoy Show‘ and explained that his Twitter presence is a recruiting tactic as it helps him and his staff connect with recruits and their families.

“I think when people kind of attack you and that’s grouped in there, like, ‘He’s just a clown,’ or whatever, you know. That Twitter stuff’s on purpose. That energy in recruiting,” Kiffin explained.

“When I walk into a recruit’s home, I hear all the time from a parent, ‘Oh man, we love following you on Twitter,’ and it just starts conversations. That’s done on purpose, and I think some people don’t understand that.”

Everything Kiffin said makes complete sense. While Kiffin may be getting older, the teenagers he’s recruiting certainly aren’t and the hours kids are spending on social media are only going up.

It’s something so simple, for Kiffin to be active on Twitter, and it’s already paid off during his time in Oxford. Ole Miss had the No. 17 ranked recruiting class in 2021 and will be looking to improve on that number for the class of 2022.

Kiffin recently took it upon himself to start his own Instagram account as well. The only person he followed for quite a while was Arch Manning, arguably the most sought-after recruit in the history of college football. He’s since followed other recruits and players on his team.