Larry David Has Numerous A+ Suggestions For The NFL, Including Getting Rid Of The Goal Posts 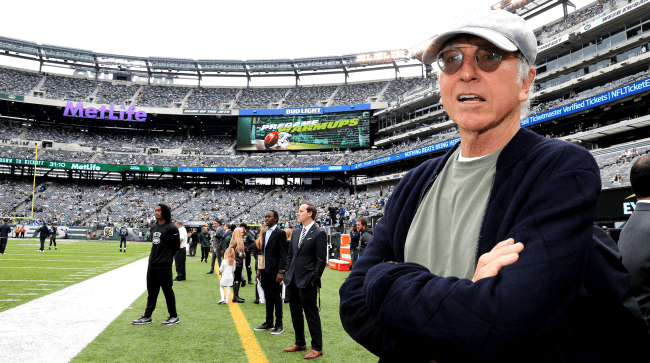 Big time football fan Larry David, the creator of hit shows like Seinfeld and Curb Your Enthusiasm, appeared on The Rich Eisen Show on Wednesday to share numerous hot takes on the state of the NFL.

During the conversation, Larry David was asked what changes he would make to the NFL if he were commissioner.

“Number one, and I really don’t care if people like it or not, I’m losing the goal posts,” David replied. “Why are there goal posts? Why are kickers… who don’t have football skills, they’re not football players, but I’m sure they’re wonderful people, why are they kicking the ball through goal posts to decide games? It doesn’t make any sense at all!

“First of all, goal posts are a relic from the old English rugby, I think. You know, when they used to actually run and kick a ball through a goal post, but they don’t do that in the NFL. There’s no need for goal posts. Wouldn’t the game be better without them? Think about it.

“So you’re going forward on fourth down every time?” Eisen asks.

“Yes. If you’re on if you’re on the other team’s 30 yard line, you know you’ve got four downs to get a first down. You’re not playing for a field goal, you’re playing to score a touchdown, and let me tell you something, when you score the touchdown, okay, you’ll be the winner yeah and you’ll be the deserving winner.

“They won’t say, ‘oh, the kick missed by this…,’ no, you’ll score a touchdown the old-fashioned way, the way it’s supposed to. That’s how you get points. This field goal kicking, I can’t stand it. Cannot stand it.”

Larry David also had a few more suggestions for the NFL.

(3) No more kickoffs. Just start out at the 35 yard line after a touchdown is scored.

(4) Change overtime rules so a coin toss doesn’t have the potential to decide the winner of the game.

David also explains what he would do with the New York Jets if he were calling defensive plays as well as if he were the team’s offensive coordinator.

When all is said and done, really, Larry David as the NFL commissioner instead of Roger Goodell actually ends up sounding like a very good idea. Even if, as Larry David eventually tells Eisen, “By the way, I know nothing about football.”