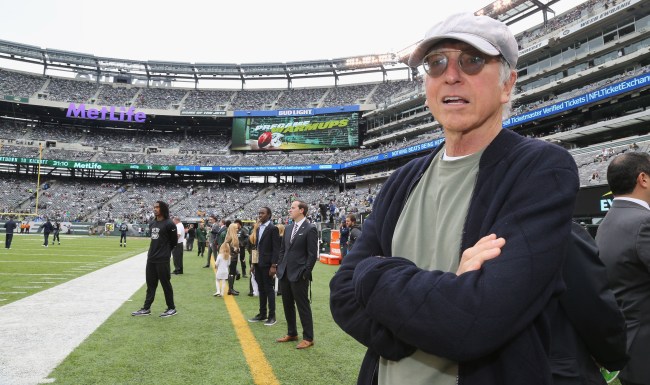 With his appearance, tone of voice, and general Larry Davidness, it can sometimes be difficult to take the legendary comedian seriously. After all, he’s made a living off of poking fun at bizarre everyday moments, so the line between real Larry David and television Larry David can sometimes get blurred.

But while Larry David the comedian and Larry David the real person can usually seem to be one in the same, the fact is that the real Larry David does regular guy things like the rest of us, such as root for wildly underachieving sports franchises.

Born in Brooklyn, New York City in the late 1940s, David, unfortunately, got stuck with the life-long affliction that is known as being a New York Jets fan. I would know, as I suffer from the same disease. The difference between Larry and I, though, is that he’s got enough fame and influence to actually rub elbows with the decision-makers of the New York Jets, and like any decent New Yorker, he had tried to use that influence to help the team.

Appearing on the Michael Kay Show on ESPN 98.7 FM, the 72-year-old Seinfeld creator claimed that back when Lamar Jackson was entering the National Football League, David told then Jets general manager Mike Maccagnan that the team should draft him. And according to David, the now-fired Jets GM responded “condescendingly” and laughed him off the phone. Funnily enough, Maccagnan was fired earlier this year.

Larry David called the Jets and told them to draft Lamar and they laughed him off the phone. Truly the greatest person of all time pic.twitter.com/fSG7bHfO6F

Put it this way: when the guy who invented Curb Your Enthusiasm has a better read on league-changing draft prospects than the man in charge of bringing in players, then you have a serious problem. New York Jets football, baby!