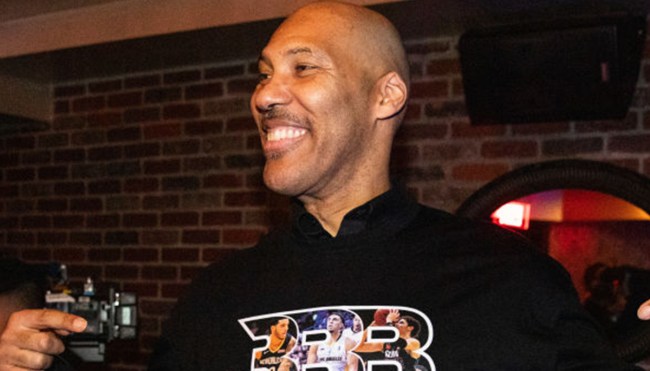 If you’ve ever been tasked with watching a toddler, you know the last thing you want to hear when they wander into another room is nothing, as there’s a very good chance you’ll be greeted by a Sharpie mural that appeared on the wall, a two-year-old chowing down on a half-empty bucket of Play-Doh, or some other disaster following an extended period of silence.

When LaVar Bar first burst onto the scene, he quickly established himself as a toddler in the body of a 50-year-old dude thanks to his self-absorbed personality, penchant for throwing temper tantrums, and tendency to insist he can do things like beat Michael Jordan one-on-one even though he decidedly lacks the skills required to pull them off.

LaVar was practically impossible to avoid for a few years, so when you consider the man who did everything in his power to embarrass the three sons he routinely tried to box out of the spotlight has been suspiciously quiet over the course of 2021, you had to know it was only a matter of a time until he’d return with a vengeance—and he’s done exactly that.

On Tuesday, we got our first look at the first pair of shoes LaMelo Ball dreamed up with Puma after betraying Big Baller Brand and signing with a company that more than seven people on the planet care about (and one that doesn’t make shoes that explode every few quarters).

I don’t know if I’d shell out $125 for those, but they’re an absolute steal compared to the new line of lifestyle shoes LaVar unveiled shortly after LaMelo’s announcement. As of right now, the Big Baller Brand website is offering these Stan Smith knockoffs in four different colorways, which will run you $695—unless you opt for the impressively gaudy “I Told You So” option that’s retailing for $895.

Featuring Italian leathers, prices range from $695 for the “classic” colors to $895 for the “I Told You So” theme. pic.twitter.com/kubrvvbD1J

The sales pitch on the new shoes essentially boils down to two bullet points, as they were “designed and inspired by LiAngelo Ball” and are made with “Full Premium Italian Leather.” That seems like a fairly hard sell to me, but hey, maybe this will be the first time things actually work out the way LaVar intends.