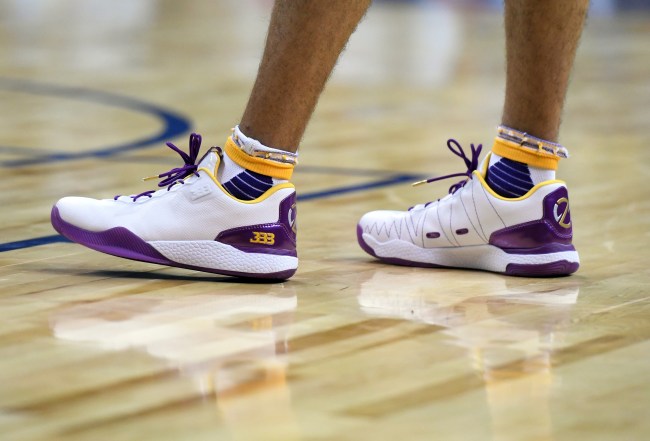 Back in 2017, Lonzo Ball debuted Big Baller Brand’s first signature sneaker, the ZO2s. The shoes made headlines because of their absurdly high $495 price point.

Big Baller Brand has begun pre-sale for the ZO2: SHO’TIME for @ZO2_ at $495 pic.twitter.com/S86fpqhtUX

Lonzo’s father, LaVar, infamously defended the price of the shoe by mocking Adidas, Under Armour, and poor people for not being able to afford them.

I figured that’s what the shoe was worth,” “I liked the way it sounds. You see, when you are your own owner, you can come up with any price you want.”
“Let Nike and Adidas and Under Armour — they battling below me,” “They’ll go ahead and put all their stuff in Foot Locker. I’m better than them. I’m a step above.”

Big Baller's loose! If you can't afford the ZO2'S, you're NOT a BIG BALLER! 💰

On Wednesday, Lonzo went on to Josh Hart’s “Lightharted” podcast to reveal that the first early batches of the Z02’s “weren’t ready” and that he had to constantly change shows during games because they kept “exploding” on him.

“Those ZO2s I was playing in, they was not ready,” ,”No one knows the real story about them shoes

No one knows this but DMO had a backpack and he had like an extra four pairs of shoes in there because I had to switch them every quarter because they would just rip. If I had say in the first two games – the real truth — them shoes wasn’t ready.

If you literally had my shoes from those games, they just exploded, bro.

When asked why he wore them if they were becoming such a problem.