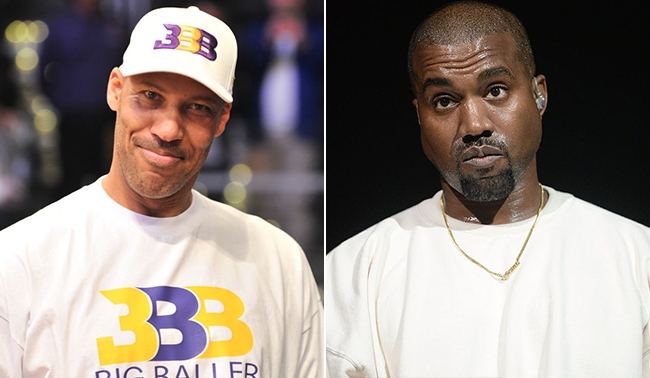 In 2017, LaVar Ball came down with one of the most severe cases of talkshititis that I’ve ever seen, a crippling condition that exponentially inflates your ego and makes it impossible to go more than a few days without firing shots at other people.

The condition resulted in Ball repeatedly rustling an impressive number of jimmies by doing things like saying he’d make Michael Jordan cry if they played one-on-one and calling out LeBron’s kids for being bad at basketball (which The King did not take kindly to).

He also posted a GIF of himself dunking on Donald Trump because of course he did.

It appears Ball symptoms have subsided a bit based on how quiet he’s been in recent months but there’s another high-profile talkshititis sufferer who’s gone through a bit of a flare-up: Kanye West, who has spouted off a number of Hot Takes over the past few weeks.

However, this weekend, West took a break from riling people up to stop by ESPN, where he apparently met up with Ball to finally give us an answer to what happens when an unstoppable force meets an immovable object.

It turns out the answer could be “they make a shoe together.”

According to Sole Collector, Kanye retweeted a number of people who speculated a Big Baller Brand x Yeezy collaboration could be on the way and a tweet from a fellow GOOD Music rapper seemed to insinuate that something might be in the works.

However, as the ever-vigilant LonzoWire notes, West would likely have to seek approval from Adidas in order to bring a BBB collab into the world and something tells me the company would be a bit hesitant to give Ball the legitimacy he craves.

Is this the beginning of a beautiful friendship? I guess we’ll find out.