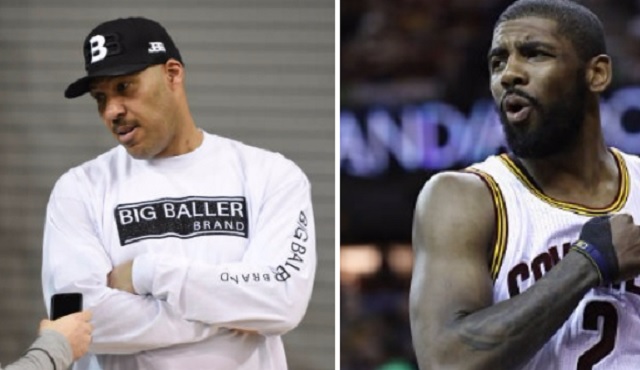 Last week on Richard Jefferson’s podcast, Cleveland Cavaliers star point guard Kyrie Irving, who was pushed during his early basketball career by his father Dred Irving, had advice for LaVar Ball on his relationship with his NBA bound son.

I had to have a talk with my dad, and I was just like, ‘Man, Dad, I love you, but I’m going to make my own decisions,'” “And he told me, when I turn 18, I’m responsible enough for myself to make my own decisions, and he’s going to be there to help along the way. But when I turned 18, like, I got my first tattoo. I got my ear pierced. I just started doing my own thing.”

Ball heard about Irving’s comments and fired back.

LaVar Ball responded to #Cavs Kyrie Irving's comments from the Road Trippin' Podcast. Little does he know Irving actually is a father. pic.twitter.com/ON5WgSbmks

You have some young people that’s out here critiquing,” said Ball. “‘Oh LaVar needs to let Lonzo go.’ How you young guys gonna say anything when you ain’t got no kids?”

“Kyrie, Definitely!” “How you gonna tell me how my son should be when you don”t have a kid?”

And then LaVar said this.

Of course LaVar is dead wrong as usual because Kyrie does indeed have a daughter and the reason his “mom wasn’t there” is because she passed from Septis Syndrome at the age of 29 when Irving was 4-years-old.

Just another case of LaVar being LaVar and talking out of his ass.