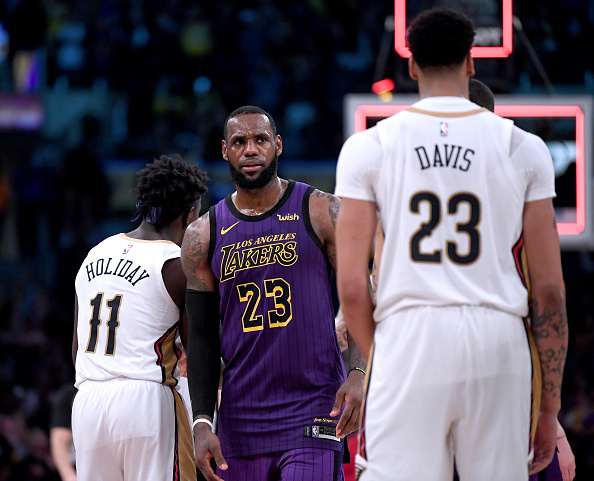 Last week LeBron James caused a bit of a firestorm when he answered a question from a reporter on whether he wanted Pelicans’ superstar Anthony Davis to join the Lakers.

Apparently several GMs of small market GMs were pretty pissed off that the league didn’t fine LeBron for tampering over his comments about Davis.

Several GMs told ESPN that they reached out to New Orleans Pelicans GM Dell Demps to express dismay over what they perceive as the NBA’s tacid endorsement of James’ comments to ESPN’s Dave McMenamin calling the possibility of Davis’ arrival as “amazing” and “incredible.”

“It’s New Orleans’ problem today, and a problem with a different player tomorrow for the rest of us,” one Eastern Conference GM told ESPN. “It’s open season on small markets and our players.”

While speaking to the media after last night’s Lakers-Pelicans game LeBron mocked his critics by naming more players he wanted to play with in a sarcastic tone. LeBron also went on to say that those GMs who criticized him are trying to control him and are angry that they can’t.

LeBron would play with anyone 😅 (🔉⬆) pic.twitter.com/s0N4OlFfu2

James: Ask me would I like to play with Kevin Durant?

Reporter: Would you like to play with Kevin Durant?

People get caught up in bunches, sometimes when they wish you can control what they say, but they can’t control me at all. And I play by the rules.

The Lakers and LeBron are eventually going to form another super team in L.A. whether the NBA or GMs like it or not.