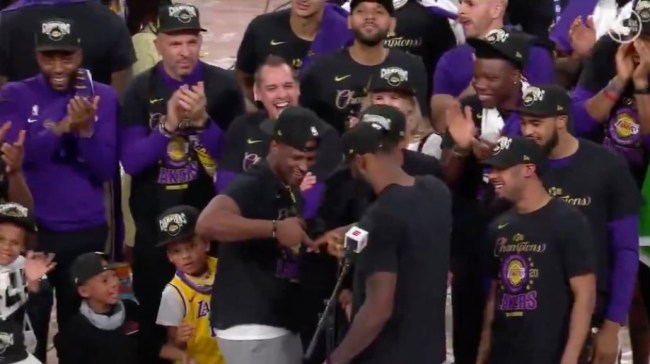 A handshake between LeBron James and one of his teammates has apparently upset members of a Chicago gang.

During the Lakers’ championship celebration on Sunday, LeBron and Dion Waiters busted out a one finger handshake that is similar to a gang sign diss called “dropping rakes” which is meant to disrespect Chicago’s Gangster Disciples gang.

While LeBron’s handshake is probably innocent in nature, the GD’s are upset and believe he’s deliberately taking a shot at them.

“Dropping rakes” is a diss aimed at the Chicago gang, The Gangster Disciples.

The Gangster Disciples throw up rakes, and their enemies throw them down which is seen as a disrespectful gesture towards the gang.

Several people associated with the GD’s took to Twitter to call out LeBron for allegedly showing disrespect towards the gang.

@KingJames on some real shit don't drop the rakes nomo

Lebron done dropped the rakes too many times for me, we on his ass 😭😂

It’s very unlikely that LeBron is dissing anybody here, but he should probably drop the handshake and come up with a new one just in case.