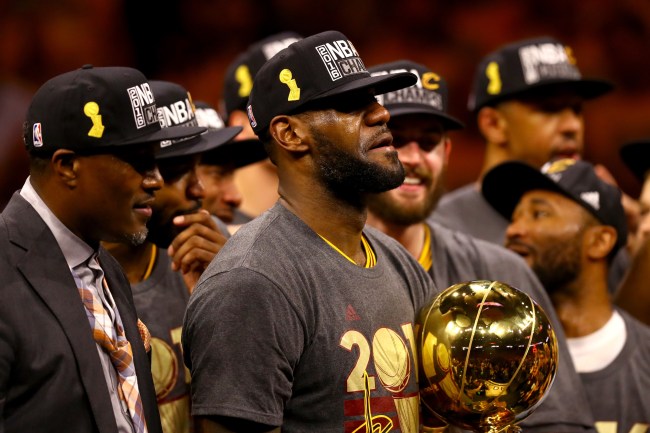 LeBron James continues to be the greatest basketball player on the planet, even though he’s currently hurt with a groin injury. Now, whether or not that’s as the all-time GOAT — as he recently pronounced himself — as the GOAT in my eyes, or just one of the top players ever, that’s a debate that will always rage on. But, what James did during the 2016 NBA Finals, in my mind, is why he’s truly the best player ever.

Forget that fact that I’m a huge LeBron James fan and have the Sports Illustrated cover of him hoisting the Larry O’Brien Trophy framed in my apartment, because that’s simply not a factor in determining his GOAT-ness. What should be considered for his GOAT resume, though? How he helped lead the Cleveland Cavs back from a 3-1 deficit to beat the Golden State Warriors in that 2016 NBA Finals.

And, thanks to the series that ESPN is running about James, entitled “More Than An Athlete,” we got a little insight as to what the Cavs locker room mentality was as they maneuvered their way to that comeback, ultimately winning the series in seven games.

That’s because a video from the locker room was tweeted out by ESPN, showing LeBron James telling his teammates that the Warriors were “f-cked up. Mentally and physically. I’m telling you, they f-cked up.” Take a look at the video below.

On ESPN+, “More Than An Athlete" takes you inside the Cavs locker room after the crucial game. https://t.co/8vE9wIaUfr pic.twitter.com/KLgQQ2Mnjy

To recap why James thought this way, let’s take a look at some of the incidents that led up to a 115-101, Game 6 victory for the Cavs, which tied the series and sent the NBA Finals back to Oakland for a deciding Game 7.

All of that, coupled with the expectations after a 73-9 regular season — which was the greatest an NBA team ever had — made LeBron James think that, just maybe, the pressure was starting to get to the Golden State Warriors. And, after leading his team to a Game 7 victory a few days after this video was shot, it turns out that James may have been right.