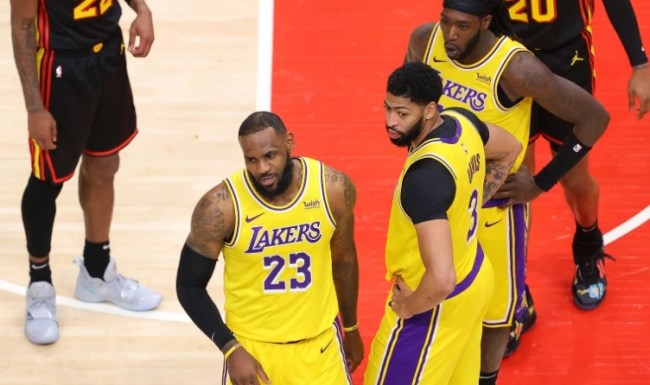 The LeBron James-Courtside Karen story just keeps getting funnier by the minute.

During Monday night’s Hawks-Lakers game, LeBron was involved in a heated altercation with a woman and her husband sitting courtside.

After the couple got kicked out of the arena, the woman, Juliana Carlos, claimed LeBron had cursed her and her husband out during the game.

He was like fuck you bitch, sit down bitch, and now all of a sudden I’m getting kicked out?

The Athletic went on to review all the courtside videos currently available and apparently, the only comment that is audible coming from James is of him saying “Ol’ steroid ass.”

Juliana Carlos, one of the people ejected, said on Instagram that her husband, Chris Carlos, was cursed out by LeBron James.@TheAthletic reviewed courtside video from Carlos and others; the only comment audible from James is him saying "Ol’ steroid ass."https://t.co/joHSc9srjw

This appears to be where Bron drops the "ol steroid ass" burn on Chris Carlos pic.twitter.com/KK3fdGsC3X

Juliana’s husband, Chis Carlos, is a partner at an Atlanta-based liquor distribution company and is pretty jacked for a man of his age.

Section 3, Clause 12 of the NBA Rulebook states that all 30 teams must have a couple who looks exactly like this sitting court side at every home game pic.twitter.com/xRLuB9oBAg

Despite the on-court beef, LeBron enjoyed the trash talk and didn’t think the couple should have gotten kicked out.

“I don’t feel like it was warranted to be kicked out,”