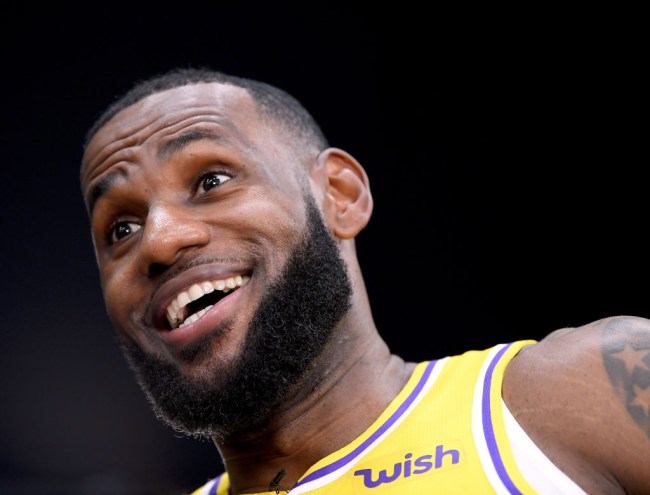 LeBron James’ thoughts have been all over the place when it comes to the idea of playing without fans when the NBA resumes. Before the entire sports world hit pause James came out and said “I ain’t playing” if there aren’t fans in the building. Then, just three days later after most likely receiving a phone call from NBA commissioner Adam Silver, he completely changed his mind and said that he’d be open to it.

Outside of letting the world know he’s back to eating tacos on Tuesdays, James has been pretty quiet as of late, but the topic of playing in front of fans came back up on the latest episode of The Road Trippin’ Podcast and James just couldn’t help from blurting out complete nonsense.

To kick things off, James asked the open-ended question of “what happens when a guy who is tested positive for corona and you’re out there on the floor with him and it’s a loose ball?” That’s a valid question and I’m sure pretty much every NBA player has thought about that scenario as well, but it’s probably a safe bet the NBA isn’t just going to just mess around with this situation and put you or any other player in an at-risk situation, LeBron.

That was just the appetizer of the five-course meal of garbage James served up during the podcast.

The topic of playing in an empty arena made itself into the discussion and James decided to turn into Mr. Philosopher and try to get all deep with his answer.

“Like, if it’s get out there and get back on the floor 5-on-5 … but like, we can do that in scrimmages. Let’s just go to each other’s practice facility, put out a camera, just scrimmage and livestream it. … I just don’t know how we can imagine a sporting event without fans. It’s just, it’s a weird dynamic.”

I’m pretty sure the word ‘sport’ without ‘fan’ is still just ‘sport’. While you may not call me playing in a rec league ‘sport’ because there’s not a single fan inside the building, it’s still ‘sport’ in my mind because you know who saw me score eight points and go 1-for-6 from the free-throw line the other night? Me, and that’s what counts.

Talk about a really shitty situation, though. James and other players around the league may be asked to go back to playing basketball for millions and millions of dollars, but they may have to do it without fans in the building. The horror those guys may have to face is frightening to think about.

It was only a few months ago James received the bad news that his trademark request for ‘Taco Tuesday’ had been denied, and now he’s going to have to walk into an empty arena to earn his paycheck? Damn.

It’s safe to say that James will be happy when things finally do get back to normal and he can play in front of fans again, but he made it clear that he’s making some habit changes after all of this.

Now that’s obviously a tongue-in-cheek comment, but still, you can’t make this stuff up.