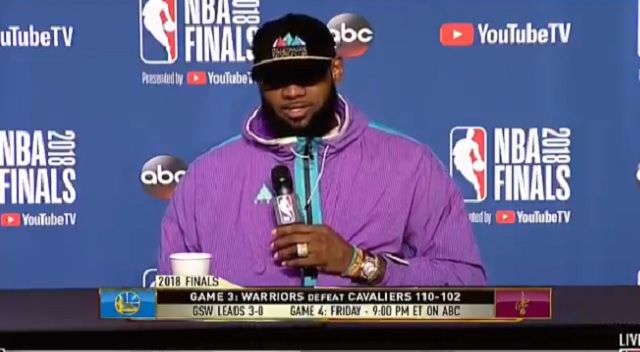 After game 1 of the NBA finals, LeBron James got into a testy exchange with ESPN reporter Mark Schwarz when Schwarz repeatedly asked the same question about whether James had any idea of what was going in JR Smith’s mind during Smith’s now infamous boneheaded play. LeBron eventually angrily walked out of that press conference and told Schwarz to “be better tomorrow”

Schwarz once again got under LeBron’s skin tonight when he repeatedly asked LeBron what was on his mind when he saw Kevin Durant hit that late game dagger three pointer and if it reminded him of Durant’s similar shot from last year.

LeBron to Mark Schwarz: I actually think you should be like a psychiatrist. You want to just keep trying to get in somebody's mind.#RingerNBA

Schwarz clearly has to be trolling LeBron at this point just to get a reaction. I wonder if LeBron and Schwarz have a history because LeBron looks like he wants to fight Schwarz everytime he asks a question.