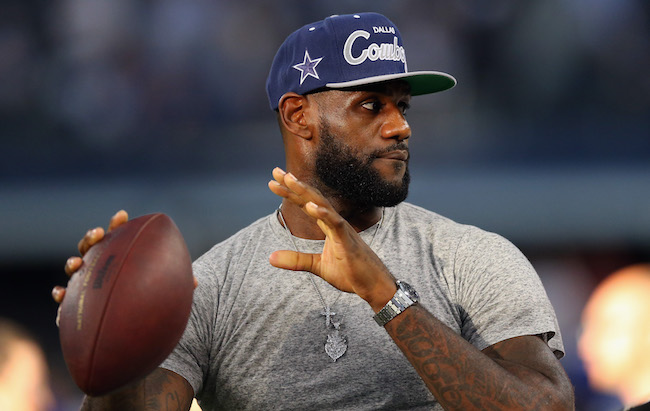 LeBron James is a freak athlete, there’s no denying that he sits toward the top of the list of ‘freakiest athletes ever,’ but that doesn’t mean his talents would just magically translate over to other sports, specifically football.

James’ name gets tossed into the ‘what if he played football’ conversation all of the time thanks to his insane athleticism, his 15-year reign in the NBA, and the fact that he’s 6-foot-9 and weighs 250 lbs. He was also a dominant wide receiver for two seasons in high school before ultimately turning all of his attention to hoops.

While it’s an absolute guarantee that James would be a real problem for any defender in the NFL, Doc Rivers took things a bit further during an appearance on the Uninterrupted podcast and said that James may have been “the greatest football player ever” if he took his talents to the NFL.

“I really believe if LeBron James had to play football, he may have been the greatest football player ever.”

While I 100% believe that James could have had a successful career in the NFL, to say he would have turned into one of the greatest players of all-time may be a stretch. James and his 6-foot-9 legs would take a bit of a beating in the NFL, there’s no telling if his body would hold up on the football field like it has on the hardwood all of these years.

Let’s assume James would have played wide receiver thanks to being almost 7-feet tall. Quarterbacks could just toss up corner fades to the man in the red zone and chances are he’s coming down with the ball, but then again defenses would adjust. Hell, if James would have actually played in the NFL it would have changed the landscape of the league and the average height of defensive backs and safeties would be a couple of inches taller just because of the threat of James.

While there have been some gigantic wide receivers in the NFL, James would simply be a different kind of gigantic wideout.

It’s always fun to think about the ‘what if’s’ when it comes to the best athletes in each sport. The NBA and NFL are probably the most interchangeable when it comes to athletes thanks to their size and it really would be something to see James on the gridiron. Just the thought of seeing the man in full pads is tough to fully imagine.