The Story Of How LeBron Gifted Anthony Davis The No. 23 Lakers Jersey Sounds Like A Really Awkward Promposal 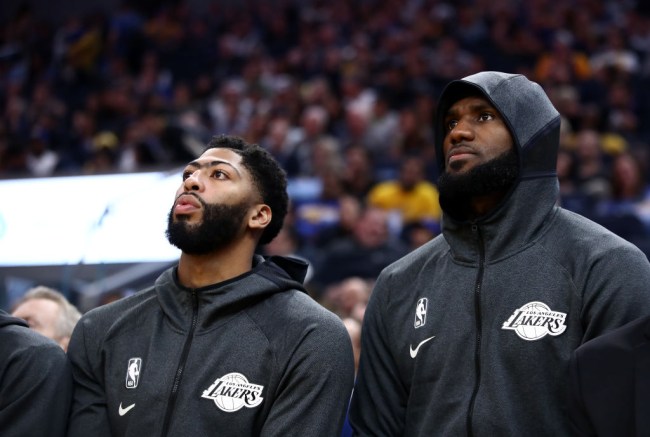 One of the many questions we all had when Anthony Davis was traded from the Pelicans to the Lakers was which number he would wear. Granted it was well down the list of things we were curious about, it was still something to question.

Earlier this year we found out that LeBron James was going to give up his No. 23 Lakers jersey number to Davis, who wore the digits while at Kentucky and during his time with New Orleans. James would switch to the No. 6 jersey he wore in Miami and all would be good.

Well, not quite. Nike stepped in and said not so fast due to the fact that they would have tens of millions of dollars worth of wasted inventory.

With that being said, it’s still worth telling the story of how exactly James decided to tell Davis he could wear the No. 23 jersey in Los Angeles. It’s over the top, a bit awkward and actually sounds something like an awkward promposal.

The story comes from a detailed piece written by Dave McMenamin of ESPN:

Seated with him at the wooden booth on this clear summer night was Davis, the latest in the Lakers’ long line of star big men and perhaps the key piece to James enjoying success in the latter stages of his basketball career.

“It was the end of the dinner,” Davis says. “He pulled out a card. He was like, ‘My wife wanted me to give you this.’ I was like, ‘Why is Savannah giving me a card?'”

Davis tore open the envelope and began to read the inscription.

“‘Welcome to L.A.’ such and such and such, ‘bro,'” Davis says, remembering the note. “I stopped reading. I said, ‘Wait, Savannah doesn’t even call me ‘bro.'”

He scanned to the bottom of the card for the signature: King James #6.

“Then he pulls the jersey out.”

From inside the to-go bag the waiter had brought over, James whipped out a gold Lakers jersey with No. 23 stitched in purple numerals.

Davis figured the gift to be one of James’ own jerseys. That was until he turned the jersey around: Across the shoulders, stitched just above the No. 23, was the name “Davis.”

“He was like, ‘I know you wanted 23,'” says Davis, who wore the number at both the University of Kentucky and all seven seasons in New Orleans. “For him to, in an instant, just say, ‘Here. Here’s 23. You can have it.’ … It was a cool moment.”

Ok, first of all, why did LeBron say that his wife wanted Davis to have the card, what’s the point? Is LeBron too big to be giving out cards now?

Then things turned into an actual sitcom television show as the waiter brought over a to-go bag that actually had the jersey in it. I told you this was a story worth reading, even though the whole number thing didn’t work out.

What a bizarrely strange situation. Why not just take the man to dinner and say ‘hey man, glad you’re here, you can wear the No. 23 jersey, I know it means a lot’ and be done with it?