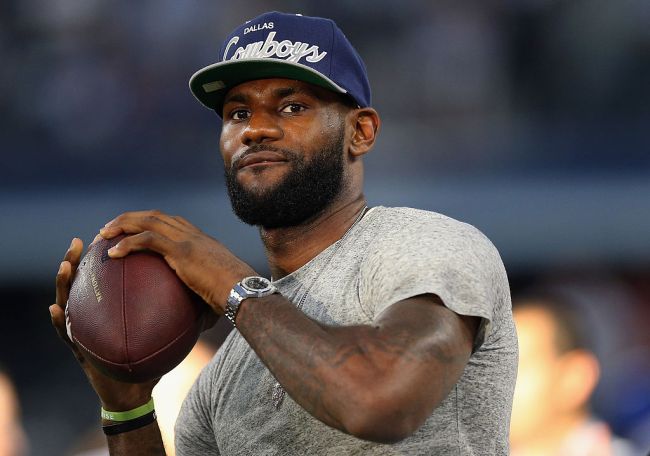 Somewhere in a dark room surrounded by empty bottles of Stolichnaya and Kleenex, LeBron James’ high school quarterback ruminates over all the errant throws he delivered two decades ago.

His phone buzzes incessantly with text messages from friends saying things like, “I’m sure he didn’t mean it” and “LOL Bron HOSED u bruh,” while trying to figure out how he’s going to tell his boss at Enterprise that he won’t be able to make it in today.

For those who didn’t witness the character assassination in front of millions watching Monday Night Football, here is LeBron James laying his destiny at the feet of his high school quarterback 20 years after

Please watch this for referencepic.twitter.com/4fdLgUoVJx

“If I would’ve had a better quarterback in high school, I might’ve continued to play football. I took way too many hits.”

Thankfully, Archie Manning appeared to urge his son to apologize to James’ high school quarterback for initiating the conversation that led to LeBron RKO’ing him on national television.

Peyton: "HE CALLED ME A FREAK" pic.twitter.com/eZoHWD497H

But, as we all know in the world of the internet, what’s done is done. People don’t forget.

LeBron’s high school QB has been telling everyone his entire life—his coworkers, his wife, his kids—about how he was LeBron’s QB and how awesome he was. And Bron just smashed it on national TV. Poor guy. His kids are ashamed and his wife is packing her bags.

LeBron’s QB in HS, if I would’ve had a better TE we would have won the big game. https://t.co/lPHMBa5BlS pic.twitter.com/3Y8K5kBuTh

First Take producer Mike Goldfarb revealed that LeBron’s high school quarterback, who I couldn’t identify at the moment, is gassed up over the shade on the ManningCast and eager to respond.

Facebook DM I woke up to this morning. LeBron’s HS QB wants to respond to being called out last night, according to his college roomy and my FB friend. Will follow up shortly 😂 pic.twitter.com/DELsONALAO

I will keep you updated on any developments with this story after the QB is upgraded from the ICU.