You Can Already Place Bets On Where 13-Year-Old LeBron James Jr. Will Play In College 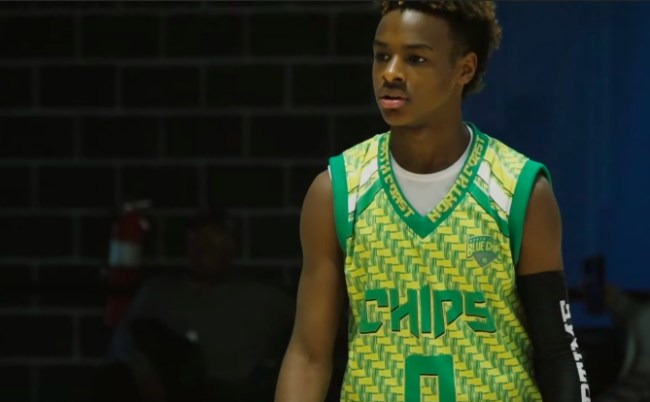 If you’re the son of an NBA player, there’s a very good chance that you’re raised from birth to play basketball because even rich people don’t want to pay for their kid to go to college if they can avoid it. Players like Steph Curry and Klay Thompson have both managed to make more of a name for themselves as pros than their fathers ever did, but other players— like the offspring of Michael Jordan and Shaquille O’ Neal— never came close to doing so.

As those last two examples prove, it’s particularly daunting to be the son of an NBA superstar— especially when the person in question is one of the greatest to ever play the game. However, LeBron James Jr. is looking to become the exception to the rule and based on his current domination of the youth basketball circuit, he’s well on track when it comes to following in LeBron’s footsteps.

The younger James— also know as “Bronny” (which as far as I know has nothing to do with My Little Pony) has already achieved more than most people can ever hope to achieve in their life by being the subject of an article in The New Yorker. With that said if the various mixtapes of him clowning on his prepubescent opponents are any indication, he’s only just getting started.

The 13-year-old is heading into eighth grade this fall, and while it’s unclear what prep school he’s going to take his talents to once he finishes middle school, people are already speculating where he’ll end up once he wraps up his high school career— and you have the opportunity to make bank if you don’t mind having your money in limbo for the next four years.

According to USA Today, European sportsbook Bookmaker.eu has already released odds concerning where Bronny will go to college five years from now. Here’s the full list:

According to some reports, the NBA could get rid of their one-and-done rule in the next couple of years so there’s a chance Junior could take a page out of his dad’s playbook and skip the whole college thing altogether. Of course, he could also end up in the JBA once LaVar Ball’s infallible master plan comes to fruition, which means we would be living in the darkest timeline.