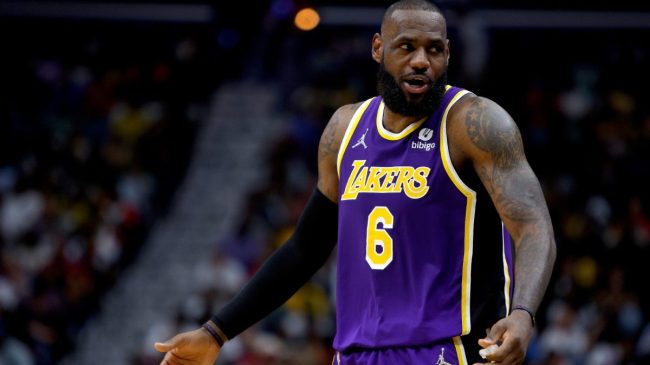 LeBron James made himself the butt of jokes on Tuesday evening with an unfortunate typo on a Twitter post. While attempting to repost a Nike promo praising the future Hall of Famer’s legacy, he called himself a “mid” NBA player.

The Nike post commented on James’s desire to put his hometown of Akron, Ohio on the map. Not only that, but his persistence to continue building the city up through community engagement, shaping the community that shaped him.

Everyone can agree, Akron is never far from LeBron’s mind, and he’s done everything possible to remember where he came from.

Since the start of his career, LeBron James has strived to put his hometown Akron, Ohio on the map. Now 20 years in, he is still working on reshaping the community that shaped him. “What Are You Working On?” featuring LeBron is out now.

But an unfortunate mistake lent NBA fans the perfect opportunity to take a shot at the All-Star player.

After seeing that post commending LeBron James and his legacy in Akron, the superstar attempted to retweet the message with a hashtag of his own.

The hashtag read, “TheMidFromAKRON,” which has led to an uproar on social media.

Obviously, James was trying to type #TheKidFromAKRON but a slight error led to a major mishap. Fans didn’t wait long to capture the now deleted message in a screenshot and post their comments online.

One fan wrote, “The Mid from Akron is one of the funniest LeBron hate names of all time and LeBron came up with it?? Truly a generational player.”

“The Mid from Akron” is one of the funniest Lebron hate names all time and Lebron came up with it?!?! Truly a generational player.

Lebron just accidentally gave himself the greatest slander name. The Mid From Akron.

James might’ve deleted the post, but nothing ever truly leaves the internet.