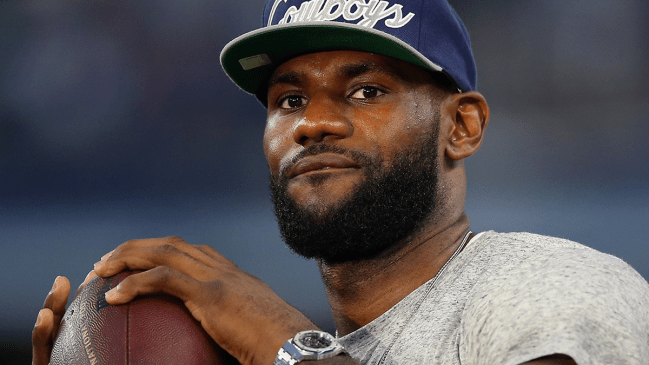 LeBron James has racked up an impressive number of achievements over the course of his legendary basketball career, but the most shocking feat of them all may have been his ability to not only live up to but surpass the almost infinite amount of hype that surrounded him in high school before making the leap to the NBA.

The man who would rightfully earn the nickname “The King” did a masterful job handling the media circus that surrounded him during his time playing for St. Vincent-St. Mary in his native Akron, Ohio, and it’s safe to say he more than lived up to the “Generational Talent” label that was slapped on him thanks to his ability to dominate on the court while there.

There was never really any doubt James would take his talents to the NBA, but there are plenty of people who say he could’ve just as easily pursued a career in football thanks to how his sheer athleticism manifested itself on the gridiron.

Last year, LeBron—who received recruiting letters from college football programs including Notre Dame, Michigan, and Ohio State—said the Cowboys and Seahawks both reached out to him about potentially defecting to the NFL during the NBA lockout in 2011.

While nothing ultimately came of those offers, James has said the idea of playing football remains one of his biggest personal “What Ifs?”—and on Saturday, he understandably attracted some attention by asking about the logistics of a hypothetical scenario where he’d join a college team.

Do I have college eligibility if I went to play another sport besides basketball? How does that rule work?

On Sunday, Ohio State athletic director Gene Smith offered his services while pointing out LeBron would be eligible to play college football because basketball is the only sport he’s pursued a professional career in.

@KingJames – If you never enrolled full-time in college and didn’t compete in the sport that you want to play after HS graduation, you could have eligibility remaining. If you professionalize in one sport, you can still be considered an amateur in another.
Would love to help you!

James could also presumably get some help from former teammate JR Smith, who joined the golf team at North Carolina A&T after enrolling as an undergrad last summer.

Of course, that transition was probably a bit easier than one that would theoretically see LeBron attempt to pivot to college football in his late 30s or early 40s, but if we’ve learned anything over the past couple of decades, it’s that it would be foolish to ever count him out in anything.