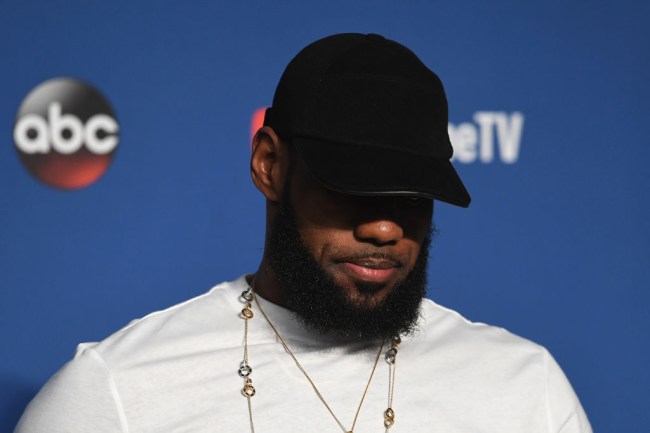 CLEVELAND, OH - JUNE 08: LeBron James #23 of the Cleveland Cavaliers speaks to the media after being defeated by the Golden State Warriors during Game Four of the 2018 NBA Finals at Quicken Loans Arena on June 8, 2018 in Cleveland, Ohio. The Warriors defeated the Cavaliers 108-85 to win the 2018 NBA Finals. NOTE TO USER: User expressly acknowledges and agrees that, by downloading and or using this photograph, User is consenting to the terms and conditions of the Getty Images License Agreement. (Photo by Jason Miller/Getty Images)

A few weeks ago, a mural depicting LeBron James as the “King of LA” was taken down by its artist after it got defaced several times by vandals.

Good news guys, the artist who painted the Lebron Mural in LA was actually the one who painted over it (@never1959)

“I don’t know if it’s LeBron haters or Kobe fans or just someone who wants attention,” Never says in the video. “The funny thing is, I painted Kobe a couple of years ago and people, like, were very quick to forget that one.”

I got a ton of support,” Never said. “At first when we had the original piece, there was a ton of positivity, but also a ton of like pro-Kobe, anti-LeBron sentiment. [Some] people didn’t like it in general, not necessarily the work, but the sentiment that went with it. People had a big problem with the word ‘of.’ I get where they are coming from.

“This was just for my own fun, just being happy that the Lakers were actually going to be talked about again,” he continued. “And I didn’t realize that a mural would be [almost] as talked about as much as the Lakers would be.”

On Thursday a new mural of LeBron looking up at Kobe, Shaq, Magic Johnson, Kareem Abdul-Jabbar, and Wilt Chamberlain as they show off their championship trophies went up in LA.

NOW THIS IS A LAKERS MURAL! pic.twitter.com/xvgnEsJqnv

Unfortunately less than two days later the new mural has been vandalized with white paint.

The LeBron hate is real.