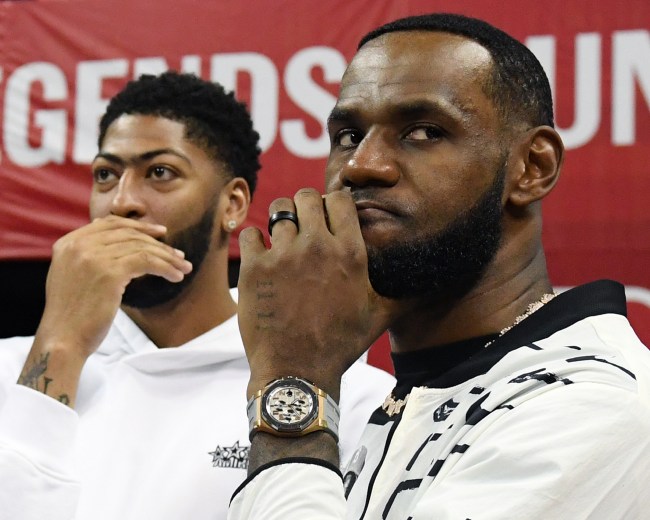 LeBron James will wear #23 for at least one more season.

Last month when the Lakers traded for Anthony Davis, James promised to gift Davis the number 23 and teased that he would return to wearing number 6. the number he wore in Miami.

LeBron even made the jersey number exchange official on Instagram.

Unfortunately, Nike and LeBron are pumping the brakes on the change because it would cost the shoe company way too much money due to the massive amount of #23 LeBron jerseys in production.

LeBron James’ plan to give Anthony Davis his uniform number will be postponed until next season, league sources told Yahoo Sports.

James had wanted to give his new Los Angeles Lakers teammate the No. 23 — which Davis had worn for his entire career in New Orleans — for the 2019-20 season.

When the Lakers inquired with the league about the jersey change, they were informed the March 15 deadline had past, sources close to the situation told Yahoo Sports. However, the league would have allowed it if the team were able to work it out with Nike, the manufacturer of the jersey, sources said.

But due to production issues and the massive financial hit Nike would have absorbed from the No. 23 James inventory that’s already been produced, Nike could not accommodate the request for this season, sources said.

Out of consideration for fans who already purchased James’ jersey and to avoid distractions for a team competing for a championship, the Lakers star will bypass seeking the number change for this season.

Davis can hit free agency next summer because he holds a player option for the 2020-21 season.