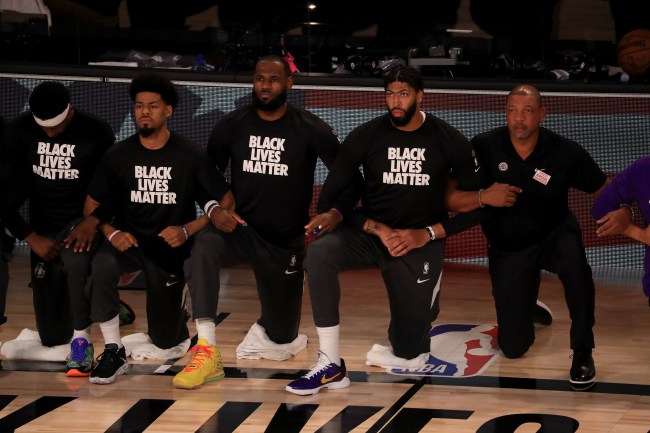 LeBron James has reacted to President Trump’s criticism of NBA players kneeling during the anthem.

On Wednesday morning, the President called NBA players “disgraceful” and said he has no interest in watching games due to the fact that players keep kneeling during the anthem.

I think it’s disgraceful. We work with (the NBA), we worked with them very hard trying to get open. I was pushing for them to get open. Then I see everybody kneeling during the anthem. That’s not acceptable to me. When I see them kneeling during the game, I just turn off the game. I have no interest in the game. Let me tell you this, plenty of other people out there, too.”

After today’s Lakers-Thunder game, LeBron responded to Trump’s comments by saying he “doesn’t think the basketball community is sad about losing his viewership.”

I asked LeBron James about Trump saying NBA players kneeling is disgraceful and "no one has done better for our Black community than me."

LeBron asked if I was trying to make him laugh.

"I really don't think the basketball community is sad about losing his viewership," he said.

Lakers’ LeBron James on President Trump saying kneeling NBA players are a “disgrace”: “I really don’t think the basketball community are sad about losing his viewership. … November is right around the corner and it’s a big moment for us as Americans.” pic.twitter.com/m8G3KQAWsd

LeBron wasn’t the only member of the NBA world to fire back at Trump. Clippers coach Doc Rivers was asked about the President’s comments and had a simple response.

President Trump: "I'm not going to watch games."
Doc Rivers: "Well we lost one guy. So what?" pic.twitter.com/dhRuC9uTnd