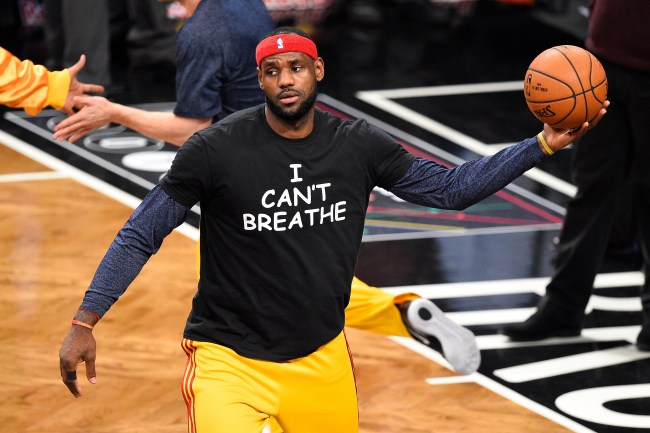 LeBron James has some thoughts about Fox News host Laura Ingraham defending Drew Brees over his “disrespecting the flag” comments.

Two years ago Ingraham infamously bashed LeBron for making political comments in public during a segment of her show “The Ingraham Angle”.

Despite her previous comments about LeBron and Durant, Ingraham went on her show last night and defended Drew Brees, who has found himself in hot water when he said that players who kneel during the anthem to protest police brutality are “disrespecting the flag”.

“Well, he’s allowed to have his view about what kneeling and the flag means to him. I mean, he’s a person. He has some worth, I imagine. I mean, this is beyond football, though. This is totalitarian conduct. This is Stalinist.”

LeBron saw the video of Ingraham defending Brees’ political comments and issued a response on Twitter.

If you still haven’t figured out why the protesting is going on. Why we’re acting as we are is because we are simply F-N tired of this treatment right here! Can we break it down for you any simpler than this right here???? 🤦🏾‍♂️. And to my people don’t worry I won’t stop until I see https://t.co/e4pJ0PvwJj

Update: Laura Ingraham has responded to the backlash regarding her comments about Brees on her show “The Ingraham Angle” and says “every-American has the God-given right to speak his mind on any issue”.

Every American, every-American has the God-given right to speak his mind on any issue. I think in order to heal and shed light on gross injustices, our country needs more dialogue, not less. And we need more respect, less retribution.

Emotions are hot right now and unfortunately, in times like these, we often find ourselves, I know it’s easy to do, talking past each other.

Right now Americans, I think most of them, are looking for reconciliation. That means politicians, police, and even cultural figures all working together. All of us.

We are all human beings on this earth for a very short period of time when you think about it, This is a moment when we should be listening and learning. All of us.