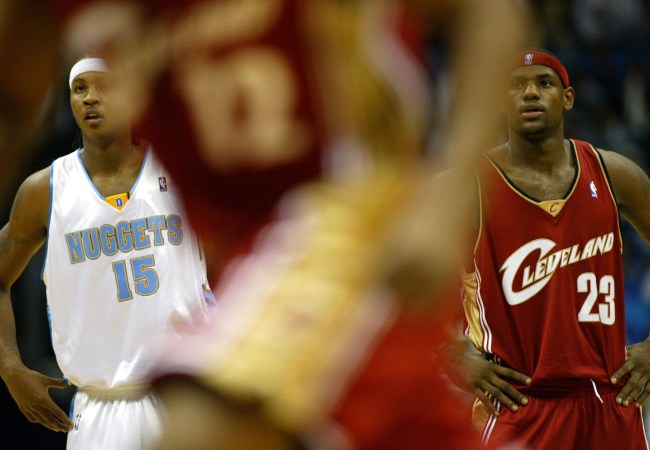 Let’s send a big shout out to anyone out there that remembers Sports. It’s been less than a full month since the last pro sports game was played but it legitimately feels like a lifetime because every day feels like a week, and every week feels like a year.

I’ve been finding interesting ways to keep myself busy without sports on TV. I have started to rank my neighbor’s trucks around the neighborhood so I can post about it in our neighborhood Facebook group and watch as Neighbor Tom melts down over his precious truck’s ranked last. I’ve also started playing FIFA20 for an hour every night until I get smoked by some middle schooler who’s shit-talking me the entire time he’s running me off the pitch.

In a normal world, we’d be in the midst of NBA and NHL Stanley Cup Playoffs right now. Instead, I’m sitting here ogling one of LeBron James‘ rookie jerseys that’s up for auction at Goldin Auctions where they say it could end up being the ‘most expensive jersey in modern history’ once the auction wraps up.

TMZ Sports was the first to report on this auction:

Goldin Auctions tells TMZ Sports … the jersey was worn during King James’ 5th and 8th games of his rookie season with the Cleveland Cavaliers … including his first-ever matchup against his best friend, Dwyane Wade, and Miami Heat on November 12, 2003.
The other game was against the Indiana Pacers, when 18-year-old Bron scored 23 points on November 7.
The jersey — which was certified legit by Resolution Photomatching — is the earliest jersey of James’ NBA career to hit the market … and could possibly end up being the most expensive jersey in modern history.
“LeBron James memorabilia is some of the most sought-after memorabilia currently,” Ken Goldin tells us.
“After setting the record earlier this year for the sale of a LeBron James card for $900,000.00, we are hoping this jersey will set the record for the highest price paid for a basketball jersey which is $630,300.00.” (via)

I’m at a loss for understanding why a card would ever sell for more than a jersey. A CARD selling for $900,000 but the jersey could only fetch two-thirds of that?! Anyone out there who understands why you or someone would want to spend more $$$$$ on a card than a jersey, hit me up on Twitter at @casspa because I’m genuinely interested in what would make a card more valuable.

The ‘Naismith Basketball Hall of Fame Auction‘ on Goldin Auctions is running through May 16 and also includes a shit ton of Kobe Bryant memorabilia including autographed shoes, game-worn jerseys, championship rings, and more. You can click here to check out that auction in full.