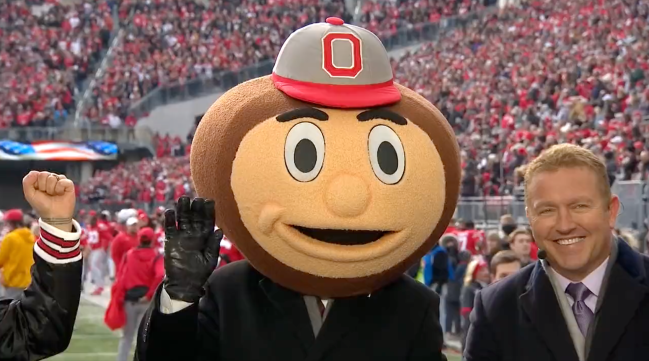 Ohio State and Michigan State pit two top-ten teams against one another with a Big Ten Championship and a potential College Football Playoff birth on the line. However, things were not even remotely competitive out of the gate and even Lee Corso saw enough.

College GameDay traveled to Columbus for what was supposed to be a competitive game between two 9-1 programs. The Buckeyes were favored by 18.5, but the Spartans were hopeful to at least keep it close.

That was not the case at all.

Prior to the game, Corso donned the home team’s headgear and predicted Ohio State to win the game.

“When in doubt, love conquers all.” 😂

Corso is going with Brutus and @OhioStateFB ‼️ pic.twitter.com/cB7v1c72ZV

Midway through the second quarter, he had had enough. The Buckeyes held a 21-0 lead at the end of the first quarter and doubled up the score in the second.

Quarterback CJ Stroud completed 26-of-28 passes for 368 yards and five touchdowns— with four minutes remaining in the first half. It was a boat race.

After running back Miyan Williams scored from one-yard out to make it a 35-0 game, Corso was done. The camera panned to the tunnel and showed the 86-year-old analyst headed back to the locker rooms. That was all he needed to see.

Kirk Herbstreit and Chris Fowler were on the call and they both had jokes.

“My pick was right, I’m out of here,” Chris Fowler said.

Here is the grand exit:

Corso is a national treasure and the fact that he left the game before halftime is a serious mood. He’s out!